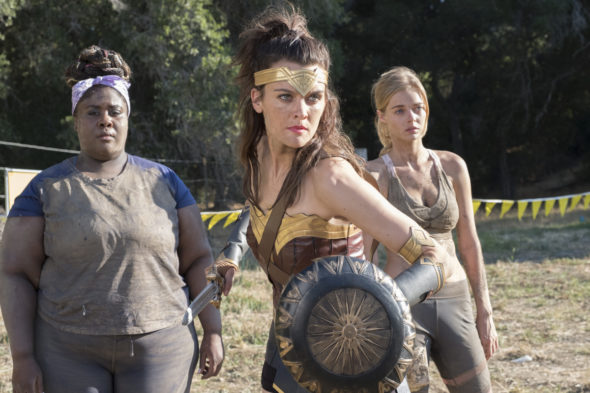 Talk about mother’s little helper. Showtime has renewed its SMILF TV show for a second season. Starring creator, writer, and director Frankie Shaw, the new series just premiered on November 5th and is based on her short film of the same name.

SMILF: A Look at the Ratings

The first season of SMILF is averaging a 0.19 rating in the 18-49 demographic and 597,000 viewers. In terms of its demo number, it ranks fifth out of all the Showtime TV shows we’re currently tracking.

Learn more about SMILF from this Showtime press release.

LOS ANGELES, CA – November 29, 2017 – SHOWTIME is picking up its hit comedy series SMILF for a second season, it was announced today by Gary Levine, President of Programming, Showtime Networks Inc. Created, starring and executive produced by Frankie Shaw, SMILF is a raw, honest look at the life of a 20-something single mom based on her Sundance Film Festival Jury Award-winning short film of the same name. The series also stars multiple Emmy(R) winner Rosie O’Donnell in her first series regular TV role. SMILF will go back into production next year. The season one finale will air on New Year’s Eve, December 31 at 10 p.m. ET/PT, with a special preview available online and On Demand on Friday, December 29.

SMILF debuted with the biggest premiere week audience for a new SHOWTIME comedy since 2012, and had its best total night this week since the series premiere. The series is currently averaging 4.4 million weekly viewers across platforms.

“From its first episode, the refreshingly honest point of view of SMILF broke through with audiences, the press and on social media,” said Levine. “Frankie Shaw is a creative force to be reckoned with and we love having her on SHOWTIME. Her show is funny and forthright, pointed and poignant, irreverent and relevant, all at once. We can’t wait to see where Frankie takes SMILF next season.”

SMILF takes a comedic look at the life of Bridgette Bird (Shaw), a young woman from South Boston whose desires for relationships, sex and a career collide with the realities of working-class single motherhood. Shaw brings her singular, unapologetic point of view to the semi-autobiographical comedy series, whose title is meant to be ironic and to reclaim the demeaning nature of the label. The cast also includes Miguel Gomez, Samara Weaving and Alexandra and Anna Reimer. Season one guest stars include Emmy and Golden Globe(R) nominee Connie Britton, Mark Webber and Raven Goodwin. Shaw wrote and directed the pilot. Executive producing alongside Shaw are Oscar(R) nominee Michael London, Lee Eisenberg and Scott King. SMILF is produced by ABC Signature Studios as a co-production with SHOWTIME. For more information about SMILF, go to SHO.com and follow on Twitter, Instagram and Facebook.

What do you think? Have you been watching the new SMILF TV series? Do you plan to tune in for season two on Showtime? Let us know, below.