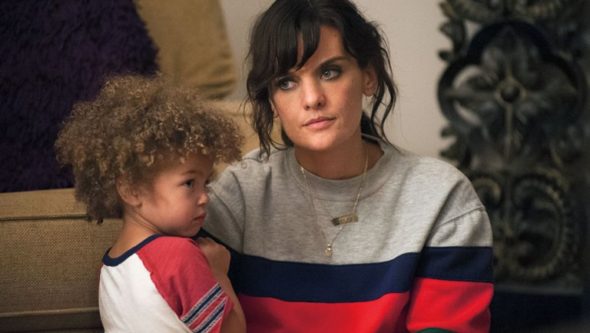 Though some prep work had already been done for the third season of SMILF, Showtime has opted to cancel the Sunday night comedy series instead.

The second season of SMILF is currently averaging a 0.06 rating in the 18-49 demographic and 201,000 viewers. Compared to season one, that’s down by 66% and 63%, respectively. There are four episodes left in the season.

There were allegations of on-set misconduct brought against Shaw and an investigation was conducted by producer ABC Studios/Signature. The investigation has since concluded and a spokesperson said, “Frankie Shaw’s overall deal with ABC Studios has been suspended without pay while we review our options.”

It’s unclear what led to the show’s cancellation but it seems that it was likely a combination of poor ratings and the investigation.

A statement from Showtime reads, “After weighing a variety of factors, Showtime has decided that SMILF will not move forward for a third season. The remainder of the second season will continue to air as scheduled on Showtime through its series finale on March 31. We remain extremely proud of the two seasons of SMILF, and thank Frankie Shaw for her singular voice and unique creation, as well as the dozens of writers, producers, actors, directors and crew members both in Los Angeles and on location in Boston, who contributed to this exceptional series.”

Following the cancellation, Shaw said, “I can’t express how much I’ve loved making this show, how much I love the cast and crew and appreciate Showtime as creative partners.” She also posted the following on Instagram:

What do you think? Did you like the SMILF TV show? Are you sorry that there won’t be a third season or, do you think it should be cancelled?

Do not cancel SMILF. It was so good. So real dealing with real life situations. Big mistake Showtime!!

Please bring it back for a third season! There is no other show that has ever quite mirrored the reality that I go through as a single mom and in a clever, funny, and heart wrenching way. This is truly a great show and it would be amazing to have some closure with a third season. This show has been story medicine in a way, how validating and affirming it is for all of us going through it. This show totally has potential to be a cult classic. People don’t know what they are missing!

I really loved that show. Something different and comedy show. Why cancel give it a chance. Where she finds her sister. Just can’t let it end like this.

I really loved the show SMILF! I would watch it every Sunday on the showtime app before I would go to sleep . It was something I looked forward to every Sunday night and I am very saddened and disappointed by the decision that showtime no longer wants to air season 3! I think it was a great show it was very true for a lot of families and single mothers I think it brought light to how life is as a single mother and the struggles they go through I think it should go on for a third season… Read more »

I am super super super bleak especially after watching season 1 & 2 over the last 2 days..I loved how it showed such a realistic approach on single motherhood – I am myself a single mum so my comment is on par with knowing wot I am saying..Pleeeeeease bring it back for the sake of us single mother’s who depend on a good show to end a hard ***** day (exaggeration cos although being a single mum is flippen hard work it’s also not a choice that I regret at all cos my terrible 2 year old is the joy… Read more »

I am so disappointed that SMILF isn’t coming back for a 3rd Season! Seems like showtime and HBO does this a lot with their shows that’s why I have canceled even my subscriptions with Showtime and HBO! Makes me sick!

I will miss this show and am so disappointed it’s been cancelled. Please bring it back!!!! I absolutely loved this show!

I think SMILF was brilliant I am extremely saddened that there will not be Season 3.

Series should have been cancelled after Season 1, it will not be missed.