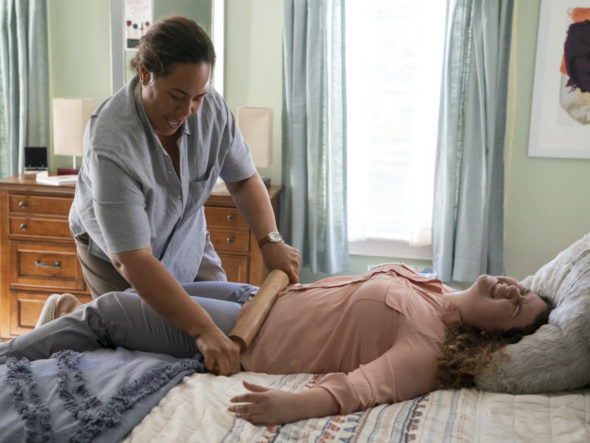 Does Bridgette’s progress end here? Has the SMILF TV show been cancelled or renewed for a third season on Showtime? The television vulture is watching all the latest cancellation and renewal news, so this page is the place to track the status of SMILF, season three. Bookmark it, or subscribe for the latest updates. Remember, the television vulture is watching your shows. Are you?

The second season of SMILF is averaging a 0.06 rating in the 18-49 demographic and 196,000 viewers. Compared to season one, that’s down by 67% and 64%, respectively. Learn how SMILF stacks up against the other Showtime TV shows.

Will Showtime cancel or renew SMILF for season three? The series’ ratings in season two are much lower than the first year’s numbers so, I’m thinking there’s a good chance it will be cancelled. I’ll keep an eye on the ratings and will update this page with any official news. Subscribe for free updates on any SMILF cancellation or renewal news.

3/8/19 update: Showtime has cancelled the SMILF TV show so there won’t be a third season.

What do you think? Were you hoping that the SMILF TV show would be renewed for a third season? Are you sorry that Showtime cancelled this TV series, instead?

I am a 65 year old woman and I love this show! Please don’t cancel it. Frankie Shaw is super talented and Rosie O’Donell are so great. I love the rest of the cast as well.Maybe she will get picked up by Netflix if you let her slip through your fingers.