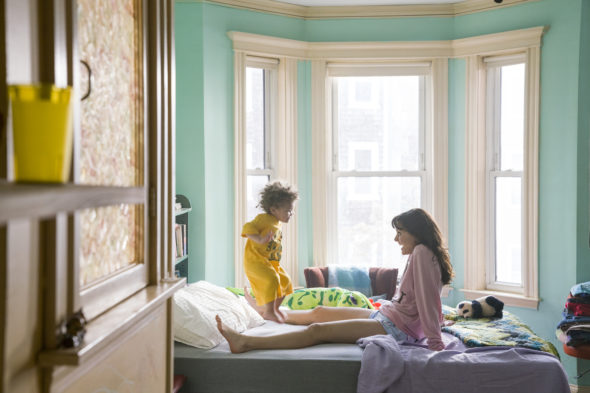 What’s next for Southie’s own Bridgette and Larry Bird? Has the SMILF TV show been cancelled or renewed for a second season on Showtime? The television vulture is watching all the latest cancellation and renewal news, so this page is the place to track the status of SMILF, season two. Bookmark it, or subscribe for the latest updates. Remember, the television vulture is watching your shows. Are you?

A dark semi-autobiographical Showtime comedy series, SMILF stars creator, writer, and director Frankie Shaw, with Rosie O’Donnell and Miguel Gomez. The cast also includes Anna Chanel Reimer, Alexandra Mary Reimer, Samara Weaving, Connie Britton, Blake Clark, Raven Goodwin, Kimberly Crossman, Mark Webber, and Mia Kaplan. The story centers on Bridgette Bird (Shaw), a working class, South Boston single mother. Although she is striving to provide a better beginning for her son (played by the Reimer twins), Larry Bird (named for the former Boston Celtics player), she still has to do some growing up of her own.

The first season of SMILF averaged a 0.17 rating in the 18-49 demographic and 548,000 viewers. Learn how SMILF stacks up against the other Showtime TV shows.

Will Showtime cancel or renew SMILF for a second season? Thouh the ratings are pretty low, my gut says it will score a season two renewal, but that’s just speculation. I’ll keep an eye on the ratings and update this page as more data becomes available. Subscribe for free updates on any SMILF cancellation or renewal news.

11/29/17 update: SMILF has been renewed for season two on Showtime. Details here.

What do you think? Do you hope the SMILF TV show will be renewed for a second season? How would you feel if Showtime cancelled this TV series, instead?

I think this show is the most refreshing new show on tv in years! It is darkly hilarious on a whole other level. It’s creative and realistic at the same time.