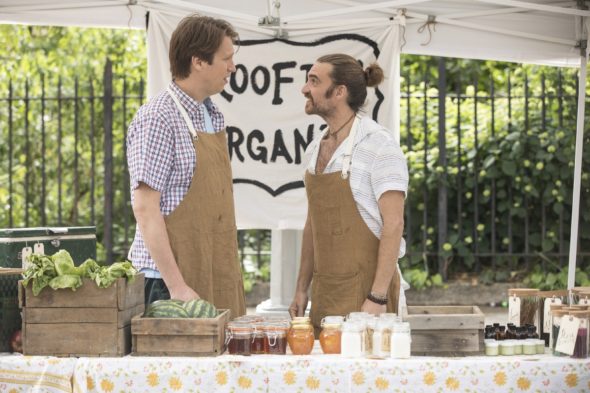 Has Pete finally put down some roots, or is he still crashing with his friends? Is the Crashing TV show cancelled or renewed for a third season on HBO? The television vulture is watching all the latest cancellation and renewal news, so this page is the place to track the status of Crashing, season three. Bookmark it, or subscribe for the latest updates. Remember, the television vulture is watching your shows. Are you?

The second season of Crashing averaged a 0.13 rating in the 18-49 demographic and 353,000 viewers. Compared to season one, that’s down by 17% and down by 14%, respectively. Learn how Crashing stacks up against the other HBO TV shows.

Will HBO cancel or renew Crashing for a second season? The show’s performance in its first season wasn’t all that impressive, but since it is not ad-supported, HBO makes its decisions in order to please paying subscribers, foster relationships with talent, and burnish its image. The Nielsens do give us an idea about audience reception but don’t tell the whole story. Though the ratings continue to be quite low, I suspect Crashing will be renewed. I’ll update this page with breaking developments. Subscribe for free updates on any Crashing cancellation or renewal news.

What do you think? Are you glad the Crashing TV show will be renewed for season three? How would you feel if HBO had cancelled this TV series, instead?