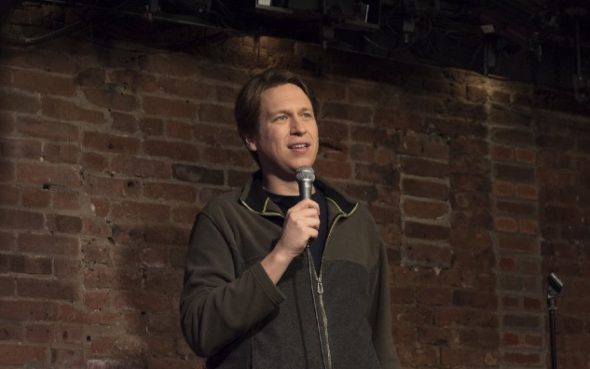 Are you a fan of Crashing? Recently, creator and star Pete Holmes spoke with Collider about the cancellation of the HBO TV show and what would have happened in season four.

The comedy is a semi-autobiographical comedy that follows Pete (Holmes), an aspiring comedian who discovers his wife is cheating on him. The cast also includes Lauren Lapkus, George Basil, Ali Reissen, Jamie Lee, Dov Davidoff, Jermaine Fowler, and Aparna Nancherla.

In the interview, Holmes revealed they did have an outline for season four of Crashing before HBO cancelled the series:

So we had the season pretty much outlined, but I’m not just saying this to be—in fact, I’d like to be clear. I’m not saying anything that I’ll tell you during the interview to just be like the positive guy. I think people maybe expect me to be. But I really do feel that there’s something lovely about the way that it ends. Because the fourth season might have dealt with some breaks or different showbiz milestones that frankly don’t happen to most people that are in comedy. The show ending where it’s ending is a little bit more true to theme, in the sense that the show was always about what it’s like to be a regular comedian and struggling. That’s why it was called Crashing, and as I’ve joked many times, it wasn’t called Flourishing.”

And what about a Crashing movie? Holmes says there haven’t been any discussions yet but he does have some ideas:

You know, I haven’t spoken explicitly with Judd or our showrunner, Judah [Miller], or our producer, Oren [Brimer], or any of the writers about this yet. My feeling would be, if we did a movie, I don’t know if it would necessarily be a one-hour or a 90-minute version of the fourth season. My feeling would be, because it wraps up so cleanly, it would have to be almost like a standalone. Like what they did with Hello Ladies. It would have to be a standalone. An idea that lights me up more would be, “Well, what is something that you wouldn’t expect? Not just a Reader’s Digest version of the fourth season, but what opportunities are there to tell a story with the characters that I love, and that the audience has enjoyed? How can we tell a unique story?”

What do you think? Have you seen Crashing? Would you have watched a fourth season?

Was the best comedy show series i have seen in quite awhile. I think Pete laid it out well. I got the point of the struggle it took to become a rising comedian. It was very funny and i am sad that season 4 is cancelled. I definitely would have watched it and will watch it when it gets renewed. I would even watch the movie. Either way i need to know what happens in the struggle of Pete Holmes. I think it would be great to hang out with him. Great show. Stop canceling great shows especially Pete Holmes… Read more »

I think the show was well written and very funny. I’m sorry it won’t continue. I wanted to see Pete become successful because I think his character would have still been insecure and suffer many rejections of a different sort . Sorry to see it go proof the executives don’t know what good is.

I agree with the 2 of you. I enjoyed this show and seeing the various stand-up cameos was always a treat. Sometimes it really seems that there is no rhyme or reason to a shows popularity. I hope Pete Holmes keeps touring as I think he is very funny and fresh.

I would have definitely watched the fourth season.

Great show! I loved the storyline and actors. I would have watched a 4th season. Come on HBO stop canceling all the great shows.