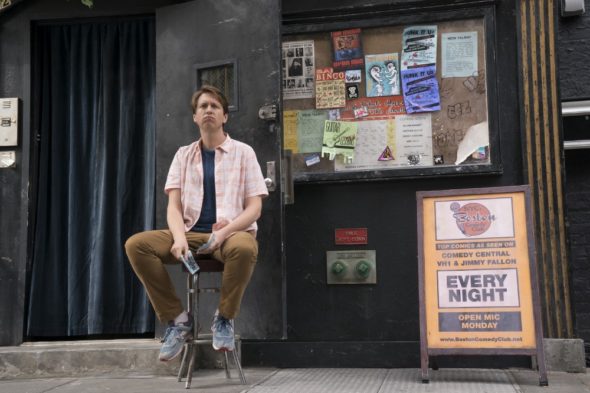 It look like Pete has a home of his own — on premium cable, at least. HBO has renewed its Crashing TV show for a third season. The early renewal comes after six episodes of the eight-episode second season have aired.

Crashing: A Look at the Ratings

The second season of Crashing is averaging a 0.13 rating in the 18-49 demographic and 341,000 viewers. Compared to season one, that’s down by 21% and down by 17%, respectively. Learn how Crashing stacks up against the other HBO TV shows.

What do you think? Are you a fan of the Crashing TV series? Did you think HBO would cancel or renew it for season three?

Hope to see more of Crashing!!!

I am a fan of Crashing!!! Can’t wait for more episodes. I truly hope it isn’t cancelled.

I love the show keep it on.. the whole family likes it… thumbs up

Very Boring show. we’ve tried to watch it for 2 seasons and its the same old thing over and over. Holnes is an insipid, unsympathetic character who should be pitied for his lack of mature intelligence and maudlin characterization. The writing is childish, and all the jokes the comedians have issued are terrible, absolutely not funny in almost every instance. Its no wonder they are struggling “comedians”, they just ain’t got it and never will. This show is not funny, not even entertaining; if the producer (not sure why anyone would produce such triffle) wnted to show the life of… Read more »

I think crashing is hysterical! Peter seems to have found his home! It’s not just funny, it hits all the right notes when comes to sex, drugs, religion! I will continue watching, keep up the good work brother! BTW, I’m an Arlington boy, and know ur father, his pretty funny as well.