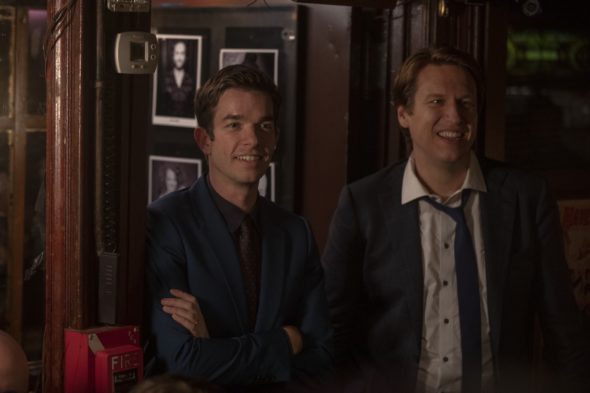 It was destined to come crashing down, eventually. The Crashing TV show has been cancelled by HBO, ahead of the season three finale. Sunday’s episode, “Mulaney,” will now serve as both the season three and Crashing TV series finale. Watch EP Judd Apatow confirm there will be no fourth season of Crashing, below. The news isn’t all grim, though. Apatow teases that there could be a movie in the offing..

Crashing to End on HBO After Three Seasons

Crashing: A Look at the Ratings

The third season of Crashing is averaging a 0.12 rating in the 18-49 demographic and 369,000 viewers. Compared to season two, that’s down by 5% in the demo and up by 4% in viewership. Crashing ranks 16th in terms of its demo numbers and 17th in terms of total audience, out of the 24 scripted HBO TV shows we’re tracking.

What do you think? Are you still watching Crashing? Is this HBO TV series ending too soon, or at the right time? Sound off in the comments.

I guess they will do the movie after Artie fixes his caved-in nose?

Crashing was special. I’m sad to see it go. I genuinely don’t think there will ever be another show that more accurately depicts life as a comedian. The rise, the fall, the grind, and an unexpected, surprising amount of heart. A great story about coming to terms with who you are and navigating the relationships in your life. Oh, and funny, too. Thanks for the ride, Pete. That being said, I think the Season 3 finale is a nice way to go out.

A comedic TV show that showed us a slice of life most of us will never see, had heart, and was more than candy-coated fluff or cynicism to the point of meaninglessness… I’ll miss it. I think that, though HBO might have had more patience than some would have, they still didn’t have enough. This show was finding its audience, more and more. It is one of my favorites. I’ll miss it. No hate, HBO, you’re a business, we get it, but you made a mistake. I think time will prove that.

One of the best shows I’ve seen in a very long time. It be great to have continued I love the character in season three, Kat. It would be neat to see his comedy pilot show become successful and him becoming the next Ray Romano. “Holmes Schooled” . Maybe even reconciling with Kat. Great show…. will be missed.

I am still watching Crashing. I could use at least one more season. Too many tv shows that I like are ending and I am sad to learn that Crashing has been added to that list.

I’m so bummed! This show was so funny and grounded. I’ve been watching since day one

I never watched seasons 1-3. I turned it off constantly.