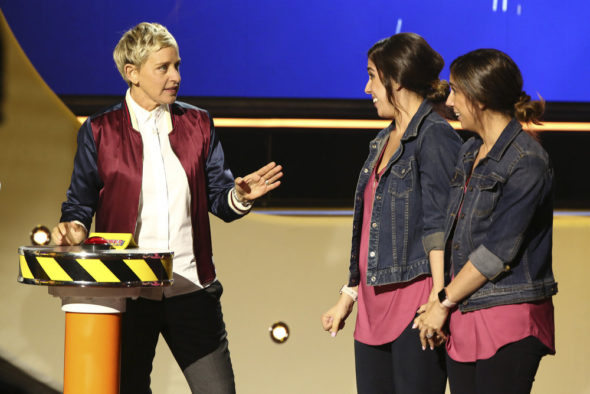 Is it all still fun and games? Has the Ellen’s Game of Games TV show been cancelled or renewed for a second season on NBC? The television vulture is watching all the latest cancellation and renewal news, so this page is the place to track the status of Ellen’s Game of Games, season two. Bookmark it, or subscribe for the latest updates. Remember, the television vulture is watching your shows. Are you?

A reality TV series competition on the NBC television network, Ellen’s Game of Games is a game show hosted by Ellen DeGeneres and features games from her daytime talk show, The Ellen DeGeneres Show. Audience members compete for a potential four rounds and the chance to win cash prizes. They try their hands at “Blindfolded Musical Chairs,” “Dizzy Dash,” and “Scary Go Round,” as well as other contests. To advance to play “Know or Go,” a player must win in a given round. The one who makes it all the way to the final round ultimately gets the chance to play “Hot Hands,” in which they have to supply correct answers to questions in a set amount of time.

What do you think?Are you glad that the Ellen’s Game of Games TV series has been renewed for a second season? How would you feel if NBC had cancelled this TV show, instead?

I watched an episode about 3 weeks ago and there was a huge flaw with the question. The question was who is the host of America’s next top model and the African American answered Heidi Fleiss When it was Heidi Klum.

What day is it on? I thought it was Thursday???

I have been trying to find out exactly if Ellen’s Game of Games is On OR Off????. I keep seeing where it was renewed for this season but I can’t find anything else about it. Tonight I turned on the guide channel to see what is on, I accidently found it on, We had already missed half of it. We started watching the show last your. We love it. It’s the only show my entire family here sits together and watches together, and laugh. We all love it. Please let me know when it is on???? That became our Family… Read more »