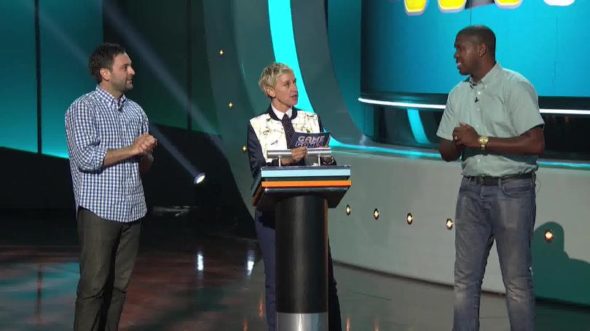 Let the games continue! NBC has handed out a second season renewal for their new game show, Ellen’s Game of Games. The series has been performing very well for the peacock network. Three episodes have aired and the numbers have improved with each installment. Season two will have 13 episodes.

“I’m so excited to get to do another season because I’m not just the producer and host, I’m also a loyal viewer,” said Ellen DeGeneres. “I hope this can continue to be a show that families can come together and enjoy watching as much as I enjoy hosting. I don’t wanna say this next season is gonna be even messier, but I have invested heavily into a whipped cream company.”

“Ellen’s enthusiasm and energy is utterly infectious. It’s been exciting to watch her antics supersized on a primetime stage,” Telegdy said. “Audiences love spending time with her and we know she’ll continue to raise the bar with even bigger games and more hilarity as the show continues to grow.”

“Ellen is a comic genius and no one relates to their fans the way she does,” said Mike Darnell, President, Warner Bros. Unscripted and Alternative Television. “With ‘Ellen’s Game of Games’ she has yet another out-of-the-box hit and we are absolutely thrilled to start shooting our second season.”

The Jan. 2 regular-slot premiere of “Ellen’s Game of Games” averaged a 2.5 rating in adults 18-49 and 9.8 million viewers overall in “live plus three day” Nielsens, and then at 9 p.m., a second episode rose to a 2.7 in 18-49 and 9.9 million viewers overall, giving “Game of Games” the #1 and #2 ratings of the night in 18-49. The 8 p.m. “Game of Games” generated the highest in-season results for a regular-slot alternative series premiere since March 2016 in the “live plus same day” stream, as well as NBC’s best in-season total-viewer performance in the time period with a non-“Voice” entertainment series in more than five years.

Multi-award winning television host, producer, writer, actress and entertainment powerhouse Ellen DeGeneres serves as host and executive producer of the hourlong comedy game show, which includes supersized versions of the most popular and action-packed games from her award-winning daytime talk show, “The Ellen DeGeneres Show.” Contestants, who are pulled right from the audience, maneuver massive obstacles, answer questions under crushing time pressure and face gigantic plunges into the unknown – all in a quest to win a big cash prize.

Every episode features DeGeneres’ one-of-a-kind comedy and irrepressible personality, along with a unique roster of games, such as “Blindfolded Musical Chairs,” “Dizzy Dash” and “Scary Go Round.” The thrill of the pressure cooker situations and the instant wins keeps audiences on the edge of their seats.

The series is produced by Warner Horizon Unscripted and Alternative Television in association with Telepictures and A Very Good Production.

What do you think? Do you enjoy this NBC TV show? Are you glad that Ellen’s Game of Games has been renewed for a second season?

Love this show. Please bring it back.

We love this show , it’s so enjoyable
We miss it, plz bring it back soon

Love the show. My kids, husband and I sit and laugh the whole time. Such a great and fun idea for a game show. A big big keeper!

Love ….show…One of the few that actually makes you laugh