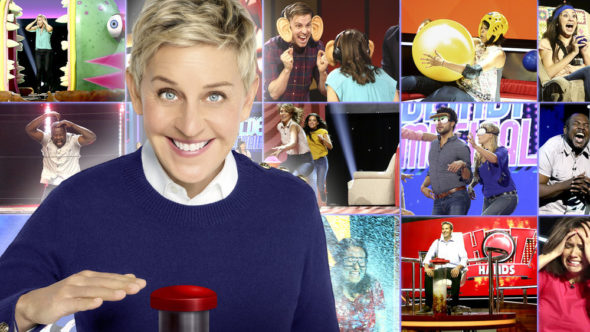 TV show description:
Hosted by DeGeneres, who also executive produces, the Ellen’s Game of Games TV show is a reality TV series competition, featuring games from her daytime talk show, The Ellen DeGeneres Show. Contestants are plucked from the studio audience for the chance to compete for sizable cash prizes.

Competitors on the game show must overcome obstacles, answer timed questions, and try their hands at “Blindfolded Musical Chairs,” “Dizzy Dash,” and “Scary Go Round,” as well as other contests.

The fun and games unfold over four rounds of play. To advance to play “Know or Go,” a player must win in a given round. The contestant who makes it all the way to the final round ultimately gets the chance to play “Hot Hands,” in which they have to supply correct answers to questions in a set amount of time.

Series Finale:
Episode #58 — From the Window to the Taj Mah Wall
Contestants play “Stink Tank,” new game “Make It Rain,” “Taj Mah-Wall” and “Mazed and Confused.” The winner of each of the first four rounds moves on to “Know or Go” and that winner advances to “Hotter Hands” for a chance to win a cash prize.
First aired: May 23, 2021.

What do you think? Do you like the Ellen’s Game of Games TV series? Should this TV show have been cancelled or renewed for a fifth season on NBC?

I Just LOVE Ellen’s talk show, AND Ellen’s Game of Games! She is one of a kind! She & Twitch make me LAUGH, and get up and Dance with my 2 yr. old Granddaughter!!! I will miss her day time show for sure, and I am praying her Game of Games does not cancel!!!

Please KEEP THIS GAME SHOW ON ELLEN’S GAME OF GAMES

I LOVE THIS SHOW & RECOMMEND TO ANYONE WHO WANTS TO LAUGH.

This program should continue as it brings laughter into so many lives.

Leave Ellens show on.. There are too few funny shows on TV now.. Way too much violence.. Not good for our younger generation. She is hillarious.

Outside of watching babies & toddlers, it takes a lot to get me laughing! The 1st time I watched this show I was in full blown laughter. I absolutely “LOVE” this show. My job allows me to pick my work schedule, and you guessed it, I picked Tuesday evenings off. There are so many violent & crime related shows on TV & this show is a refreshing change. I refuse to pay for cable & only have an antennae for TV viewing. Please keep Ellen’s game show on the air. We seniors need something of quality to watch at least…… Read more »

It should definitely be renewed?

Wow!!! I don’t really watch game shows but I think Ellen has a winner here. I laughed so hard and was entertained!!!

I laughed for an entire hour….fun game show and Ellen makes it all the more enjoyable!

PLZ RENEW THIS SHOW! It is very entertaining and makes me laugh outloud. MORE ELLEN’S GAME OF GAMES STAT!