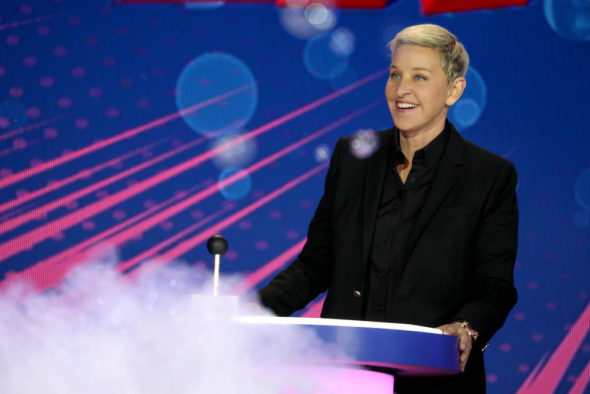 Since season three is currently airing on Tuesday nights, season four will presumably air as part of the 2020-21 season. The third season of Ellen’s Game of Games is averaging a 0.97 rating in the 18-49 demographic and 4.54 million viewers. Compared to season two, that’s down by 31% and 27%, respectively.

DeGeneres revealed the pickup this morning on “The Ellen DeGeneres Show” during which she had audience members play the always messy “Danger Word” to celebrate.

“I’m so excited. I love this show so much,” said DeGeneres. “It makes me so happy. I love games. It combines all my favorite things: prizes and surprises. I’m sure you’ve seen it but if you haven’t, you’ve been missing out. We can’t wait to get started on the next round of episodes.”

Last season “Ellen’s Game of Games” reached a total of more than 66 million viewers and scored as primetime’s #1 game show. So far this season, the show is averaging a 1.2 rating in adults 18-49 and 5.2 million viewers overall in “live plus seven day” Nielsens, and remains a strong family attraction, ranking tied for #4 among all primetime entertainment programs on the Big 4 networks with kid viewers aged 2-11.

Every episode features DeGeneres’ mischievous personality along with a raucous roster of games, including favorites from her popular daytime show as well as new games such as “Mazed and Confused,” “Runaway Bride” and “Dirty Laundry.”

Contestants in the show play different games over four rounds. The winner of each round advances to “Know or Go” and the winner of that round proceeds to “Hot Hands” for a chance to win a $100,000 cash prize.

The series is produced by Warner Horizon Unscripted and Alternative Television in association with Telepictures and A Very Good Production.

What do you think? Do you enjoy watching Ellen’s Game of Games on NBC? Are you glad to hear that it’s been renewed?

My husband and I enjoy watching Ellen’s Game of Games very much! We’re in the over 65 category. I have yet to capture a penny, but I won’t give up! I think she made it larger this year, but my dog doesn’t move fast enough for me to get close the the tv! We love this show,
and Ellen. What a great imagination!

Love Ellen she’s so positive and always brings laughter and cheer into a house and she’s such a giving person. My deceased dad never missed a show “I have to get home Ellen’s coming on!”, so everytime I watch The Ellen DeGeneres show and Ellen’s Game of Games it brings back the good memories of my dad. Also sometimes brings the tears, but in a good way as I think about how she made my dad laugh. I know my dad would have LOVED this show just as much as her other show!! Keep doing what you do Ellen your… Read more »

I truly love this show! It constantly brings smiles and laughter so how can you not like it

Love this show. Ellen has to be one of the funniest, loving and caring people ever. This show is great and it’s fun to see the delight that these games give Ellen. I’m so glad it’s been renewed.

Absolutely love this game.. I was sad when I thought it wasn’t going to be on anymore.. Very few tv programs anymore. This is hilariously funny.