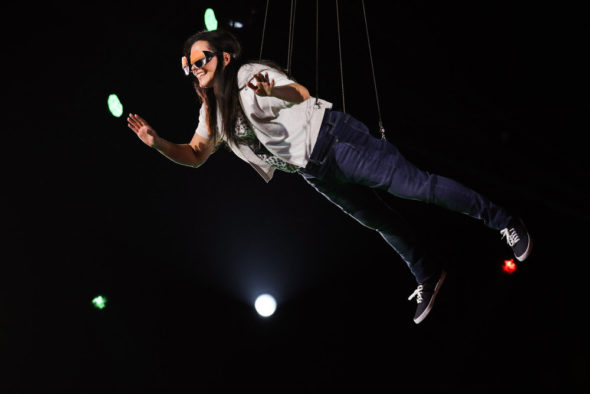 Is Ellen DeGeneres still playing around? Has Ellen’s Game of Games TV show been cancelled or renewed for a third season on NBC? The television vulture is watching all the latest cancellation and renewal news, so this page is the place to track the status of Ellen’s Game of Games, season three. Bookmark it, or subscribe for the latest updates. Remember, the television vulture is watching your shows. Are you?

A comedic NBC game show, Ellen’s Game of Games is hosted by Ellen DeGeneres and features games from her daytime talk show, The Ellen DeGeneres Show. Audience members compete for a potential four rounds and the chance to win cash prizes. They try their hands at “Blindfolded Musical Chairs,” “Dizzy Dash,” and “Scary Go Round,” as well as other contests. To advance to play “Know or Go,” a player must win in a given round. The one who makes it all the way to the final round ultimately gets the chance to play “Hot Hands,” in which they have to supply correct answers to questions in a set amount of time.

Will NBC cancel or renew Ellen’s Game of Games for season three? The first season was a blockbuster for the Peacock network, so while it is still too early to use the ratings from this season, my guess it will get a third season. Since that’s just speculation, I’ll keep an eye on the Nielsens and will update this page with breaking developments. Subscribe for free alerts on any Ellen’s Game of Games cancellation or renewal news.

What do you think? Are you glad that the Ellen’s Game of Games TV series has been renewed for a third season? How would you feel if NBC had cancelled this TV show, instead?

I think it should be cancelled. It is sadistic. Children watching it today will learn it is ok to be mean and torture and ridicule others. Horrible show. So disappointed in Ellen.

What do I do w with the coin?

Shine it up real good