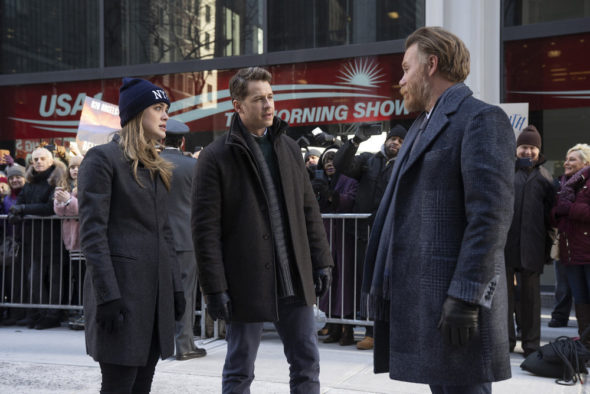 Get ready for the return of some popular NBC shows this January and February. The network announced its mid-season premieres dates for America’s Got Talent: The Champions, Manifest, Ellen’s Game of Games, Brooklyn Nine-Nine, Good Girls and The Voice. New information for Little Big Shots was also released.

The first show to return is America’s Got Talent: The Champions starting January 6th. It will be followed by the return of Manifest. Fans of the latter series will receive a 13-episode uninterrupted run of the series’ second season. Season three of Ellen’s Game of Games kicks off on January 7th.

The last of the big arrivals will come in March. Little Big Shots will premiere its new season with Melissa McCarthy in charge. An exact return date for that series was not announced.

NBC shared more about the return of these shows in a press release. Check that out below.

“Following another winning fall, the network heads into the new year with a crop of prestige shows that combine top talent with creative storytelling. With more new shows launching in 2020 than the fall, NBC’s robust winter and spring slate fuels a long-term strategy and features a completely reimagined Little Big Shots as well as three new dramas and one new multi-camera comedy.

“As we head into the new year, we’re using six-weeks of jam-packed original holiday programming to build momentum towards our January and spring launches,” said Paul Telegdy, Chairman, NBC Entertainment. “Success starts with our carefully curated linear schedule, and from there we harness the power of our growing digital audience. This multi-platform strategy is a driving force as we head into the next phase of the season with a crop of shows that are primed to continue in the great NBC tradition of capturing the heart of pop-culture.”

January kicks off with the return of last season’s breakout hit Manifest, which reached more than 60 million viewers last year. Its midseason launch enables fans of the serialized drama to enjoy an interrupted run of Season 2’s 13-episodes.

On the comedy front, January marks the conclusion of hit series The Good Place, which will go out with a forkin’ good time on Thursday, Jan. 30 at 8:30 p.m. The series finale gives fans an extra-long 90-minute block dedicated to the award-winning show, which includes an extended episode as well as a post-show special featuring the full cast and hosted by Seth Meyers.

Families can also add a new favorite to their lineup: Melissa McCarthy joins as the host of Little Big Shots with a totally reimagined season from executive producer Ellen DeGeneres. The teaming of two of the funniest minds in Hollywood will celebrate the unique kids who inspire us all.

NBC’s fall performance has been paced by television’s #1 scripted series in adults 18-49, “This Is Us”; the #1 primetime show overall in 18-49 and total viewers, “Sunday Night Football”; and additional top-20 rankings among Big 4 entertainment series from New Amsterdam, both editions of The Voice and all three Chicago dramas. In total viewers, those Chicago dramas are delivering Wednesday’s #1, 2 and 3 best results in “live plus seven day” Nielsens.

NBC is also generating dramatic increases this season in delayed and digital viewing, with the season premiere of The Good Place having multiplied its next-day “live plus same day” ratings by five times to date, while SVU has more than quadrupled; This Is Us, New Amsterdam and Superstore have more than tripled; and all three Chicago dramas and Perfect Harmony have easily doubled the next-day ratings for their season premieres.”

What do you think? Are you excited for the return of America’s Got Talent: The Champions, Manifest, Ellen’s Game of Games, Brooklyn Nine-Nine, Good Girls and The Voice? Which series are you most looking forward to?

I am anxious for This is us, New Amsterdam, and Good Girls to begin their new seasons.

no thanks to all

not one of these shows is on MY watch list, wont be tuning in for any of them…bad tv.

Glad to see 99 renewed. Also, thankful that this site had a real synopsis and then reprint of the release, rather than a bunch of click bait. I got the info i wanted and didn’t hate reading it. Well done.

I’m taking a hiatus from NBC. Their treatment of the final Blindspot season has renewed my CBS, ABC and CW viewership.

I’m honestly surprised they didn’t put it after The Blacklist on Fridays, I’m going to guess that the final season of Blindspot will air in the summer on Wednesdays at 10/9c.