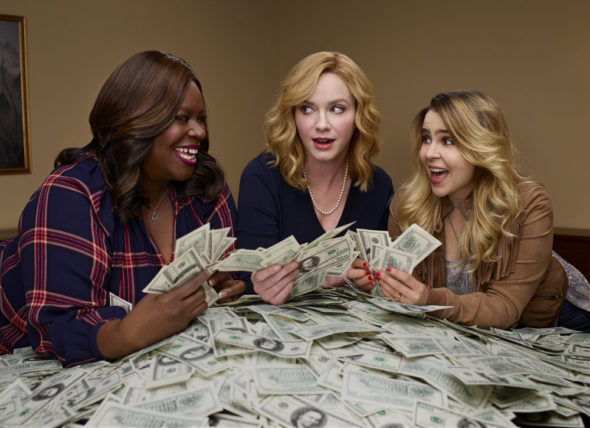 TV show description:
A dark dramedy from creator Jenna Bans, the Good Girls TV show centers on three suburban mothers who have been struggling to get by. After a series of setbacks leave them desperate, they decide to hold up the local Fine & Frugal supermarket.

Single mother Annie Marks (Whitman) is a Fine & Frugal cashier, whose well-to-do ex (Gilford) wants custody of their 11-year-old, Sadie (Stannard). Money is tight, and her manager, Boomer (Hornsby), is always hitting on her. In the course of her minimum wage job, Annie has survived an armed robbery or two. Since her sister Beth Boland (Hendrick) and friend Ruby Hill (Retta) have also fallen upon hard times, Annie proposes they knock over the Fine & Frugal and get themselves some breathing room.

Beth’s husband of 20 years, Dean (Lillard), owns a car dealership, but business has been down. After Beth discovers Dean has been cheating on her, she also finds he has gotten them terribly in debt, and they could lose their home.

Meanwhile, Ruby is a waitress, and her husband, Stan (Wilson), works as a security guard but wants to become a police officer. Their daughter has serious health problems and might need a kidney transplant. A new medicine that could get her condition under control is out of their financial reach.

When Annie suggests they rob the Fine & Frugal, Beth and Ruby laugh it off, at first. It doesn’t take long though, to give in to temptation. A small windfall could ease the weight of their most immediate money troubles.

While the ladies expect to grab about $30,000 from the grocery store vault, they end with $500,000. Although they decide they have to sit on the money, they each spend some.

Ruby takes her daughter to a new doctor and gets her on the new medicine. Beth makes payments on her crushing debt. Of course, flighty Annie spends some on a new sports car and smartphone and gets her kid a new computer.

Everything seems to be going smoothly until Boomer lets Annie know he spotted her lower back tattoo during the heist. He’ll be going to the cops unless she goes along with his sexual demands.

It’s not long before a local crime boss Rio (Montana) confronts the ladies. It seems they had a money laundering agreement with store management, which is why there was so much in the vault. They want their cash back now — or else.

To make matters worse, Boomer tries to rape Annie. Luckily, Beth catches him in the act, knocks him out, and they tie him up in her kids’ treehouse, while they try to figure out their next move. Eventually, they get some leverage on Boomer and get him off their backs for a little while.

After selling off everything they can, the women are still short a significant amount of cash. When Rio is about to kill them, Beth points out that, unlike his usual victims, they’re three middle-class soccer moms with people who will miss them. If they’re murdered in her home, there will be a community outcry, and the police will never stop working the case until it is solved.

Rio sees the sense in her words and lets them off the hook, temporarily. When he returns, he lays out the way they can settle the rest of the debt. Now, these three good girls have to make some bad choices.

Series Finale:
Episode #50 – Nevada
Beth and Rio form a surprise alliance, but don’t anticipate the shocking consequences. Beth realizes the women’s problems will never go away. Ruby makes a tough decision. Annie is ready to start anew when reality catches up to her.
First aired: July 22, 2021.

What do you think? Do you like the Good Girls TV series? Should this NBC TV show have been cancelled or renewed for a fifth season?

I’m so upset that they canceled this show, really!!!! I and my whole family love this show!!!! It’s going to be hard to ever get involved in another show again, how could they I’ve been a avid watcher from the beginning what a let down!!!!!!!!!!

I would like to see a spin off of Beth being Rio’s boss.

DONT CANCEL I ENJOY WATCHING THIS SHOW, AND ALOT OF MY OTHER SHOWS HAVE GOTTEN THE AXE!

I love this series, the women & the dark comedy. I will miss it. Hope there’s a spin-off!