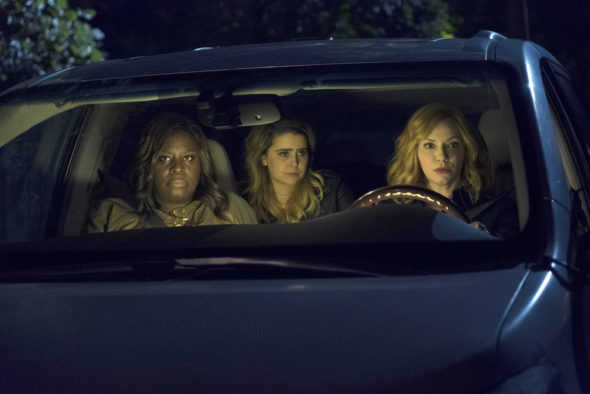 How much trouble are Ruby, Annie, and Beth in? Has the Good Girls TV show been cancelled or renewed for a second season on NBC? The television vulture is watching all the latest cancellation and renewal news, so this page is the place to track the status of Good Girls, season two. Bookmark it, or subscribe for the latest updates. Remember, the television vulture is watching your shows. Are you?

Airing on the NBC television network, Good Girls stars Christina Hendricks, Retta, Mae Whitman, Matthew Lillard, Reno Wilson, Manny Montana, Lidya Jewett, Izzy Stannard, and David Hornsby. This dark comedy-drama centers on three suburban mothers who have been struggling to get by. After a series of setbacks leaves them desperate, they decide to hold up the local Fine & Frugal supermarket, but their take far exceeds their expectations. Soon, they’re in deep with the local crime boss, and these “good girls” find themselves with an array of bad choices.

The first season of Good Girls averaged a 1.03 rating in the 18-49 demographic and 4.45 million viewers. Find out how Good Girls stacks up against other NBC TV shows.

Will NBC cancel or renew Good Girls for season two? The ratings haven’t been great so I suspect this show is firmly on the bubble. I hear that Netflix picked up the series internationally so I suspect it will be renewed because of that. For now, I’ll leaf through my takeout menus and update this page with breaking developments. Subscribe for free Good Girls cancellation or renewal alerts.

What do you think? Did you think Good Girls would be renewed for a second season? How would you feel if NBC had cancelled this TV show, instead?

My husband and I love this show. We have been binge watching it on Netflix, since we aren’t able to get NBC on our tv. Love it!! Please keep it on the air!!

Love this show. Please bring it back !!!

Love this show so glad to hear it was not cancelled. good girls is the best show ever can’t wait till March

I would love the show back
I never miss any episode
When its coming back?

I’d be upset if they cancelled the show. Both my husband and I thought it was great! Want more, want more!!

When does season 2 start??

Loved this show so much just finished season 1 I will let all my friends know about it! And pray for season 2. Fantastic story amazing acting great plot so nice to finally find something decent to watch

So happy. Love the show!

Great show why would it be cancelled?

This show is absolutely amazing! The storyline is so crafty, the characters are so watchable, and it has the right mix of suspense, drama, and comedy. I hope it gets renewed!