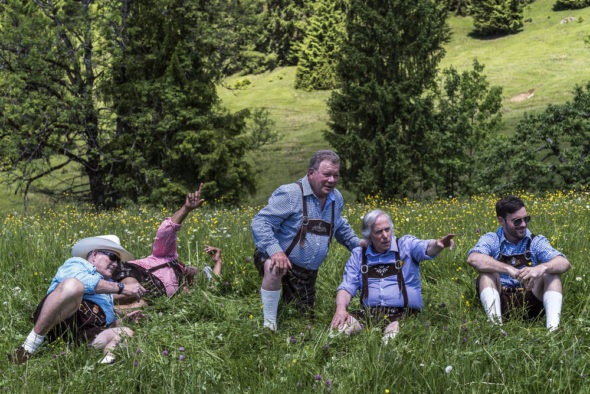 What’s next on the itinerary for Winkler, Shatner, Bradshaw, and Foreman? Has the Better Late Than Never TV show been cancelled or renewed for a third season on NBC? The television vulture is watching all the latest cancellation and renewal news, so this page is the place to track the status of Better Late Than Never, season three. Bookmark it, or subscribe for the latest updates. Remember, the television vulture is watching your shows. Are you?

A reality series on the NBC television network, Better Late Than Never follows Henry Winkler, William Shatner, Terry Bradshaw, and George Foreman, as they travel the world, with both help and misdirection from tech-savvy comedian, Jeff Dye. In the second season, the celebrities journey to Munich, Berlin, Lithuania, Sweden, Barcelona, Madrid, and Morocco. There, they’ll meet up with guest stars including David Hasselhoff and Al Roker, as well as Björn Ulvaeus, of ABBA.

In its first season, the travel reality series did pretty well for an unscripted summertime show. The numbers are nothing to write home about but it’s filling a winter break. As long as the stars want to continue, I think the series will score a third season but this show could easily be cancelled too. Subscribe for free alerts on any Better Late Than Never cancellation or renewal news.

7/16/18 update: NBC has cancelled Better Late Than Never so there won’t be a third season. Details here.

What do you think? Were you hoping that the Better Late Than Never TV show would be renewed for season three? Are you sorry that NBC cancelled this TV series, instead?

So sorry to hear Better Late Than Never has been canceled. Never laughed so hard. Those guys are funny.

I loved both seasons really wish there would be a third!!

My daughters and I would laugh hysterically at this show! We loved Terry, Bill, Henry, George, and even Jeff! Such an amazing mix of people which worked! It needs to be picked up again by another network. The ratings system is completely flawed. It’s very hard to come by quality shows now-a-days… and this was one of the few quality shows for sure. NBC dropped the ball on this one.

Please bring back better late than never such a brilliant program .reminds me of dad they all have a great sense of humour