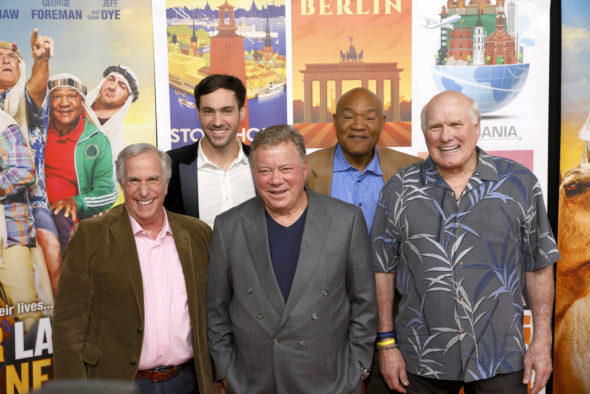 An NBC reality TV series, Better Late Than Never stars Henry Winkler, William Shatner, Terry Bradshaw, George Foreman, and Jeff Dye. An American adaption of the Korean show, Grandpas Over Flowers, in the second season, the travel show follows Winkler, Shatner, Bradshaw, and Foreman, as they journey to Munich, Berlin, Lithuania, Sweden, Barcelona, Madrid, and Morocco. Their only help comes from tech-savvy comedian Jeff Dye, who sometimes leads the men off track. Guest stars in season two include David Hasselhoff and Al Roker, as well as Björn Ulvaeus, of ABBA.

7/16/18 update: NBC has cancelled Better Late Than Never so there won’t be a third season. Details here.

My family and I really liked “Better late than Never”. It was fun to watch these learn to get along and build their relationships. Please bring it back!

This is a great show! Full of fun and laughs! We need more shows like this. Please bring it back!!

I thought better late than never was a great show! Made us laugh always.

Please bring them back!! My family loves this show!!! It’s one of the few nights we have something in common and come together!!

Was looking so forward to this third season.Just really pisses me off that they cancelled it.Hope someone brings them back.

Please bring back Better Late Than Never! It was a great show! The kids and I watched it faithfully. Their are not many clean and family oriented shows to watch!

Please return season three of Better Late Than Never. Love this show need more like these on tv. Love the guys and there comical behavior it is hysterical no nonsense laughter that needs to be on tv. Please return show love William Shattner, George Foreman, Terry Bradshaw , Henry Winkler and Jeff what a group of adult clowns.

Love this show. Really sad no 3rd season. Made us laugh. Even rewatched episodes

We Loved this show!Need more like it. Too much garbage on now. Fun guys & loved seeing different countries!