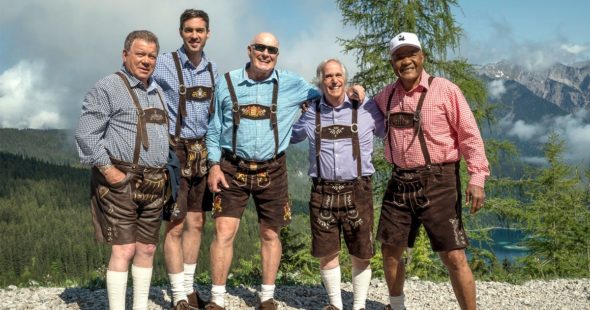 It looks like the vacation is over. Recently, Jeff Dye confirmed that NBC has cancelled Better Late Than Never after two seasons.

The reality show follows Henry Winkler, William Shatner, Terry Bradshaw, and George Foreman as they travel the world with both help and misdirection from tech-savvy comedian Jeff Dye.

On Twitter, Dye revealed NBC has decided not to renew Better Late Than Never. The series wrapped its second season in February with an average rating of .91 in the 18-49 demo and 4.819 million viewers. That’s a nearly 40% drop in ratings from season one. 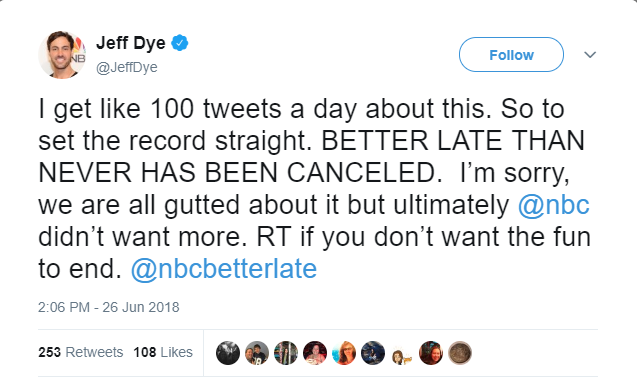 Updated with tweets from Winkler and Foreman:

Better late Than never has made; a better person of me: 4,new friends and a better world. But all done for a while https://t.co/n7pCgV8r5S

What do you think? Have you seen Better Late Than Never? Are you sad it’s been cancelled?

This was the funniest show on TV. Reconsider and get this show back on the air. All the men are treasures and need to be reunited !

This is horrible that this has been canceled!!! This world needs more laughter!!!

PLEASE … Someone Bring This Show Back It Was Hilarious I Agree It Must Not Have Been Promoted Enough… We All Loved Seeing The Hillarity These Guys Got Into Comon Shatner & Winkler’s Banter Back & Forth Foreman Was Endearing & Bradshaw & Dye Getting Into Mischief & All While Getting To See Beautiful Places Around The World.
“It’s A Winner” Compared With A Lot Of What We Have To Choose From !

I have been watching and waiting for season 3 and am sooooo behind the 8 ball. I just found this in 2021. I’ve told all my friends about this series and no one can find it. now I know why. All I can say is NBC did a poor job of promoting it because I can’t believe the ratings were bad. This was hilarious. I hope maybe Netflix and pick it up and continue. All my friends watch it on Netflix and loved it.

Please bring back “Better Late Than Never!” An actual reality show that was interesting!

“Better late than never” was the BEST show on TV that I’ve seen in forever. Please bring on season 3.

Please bring Better Late than Never back!!! We thoroughly enjoyed each episode and laughed until it was over. I mean almost 5 million people can’t be wrong. Make it right.

I am bummed that the show was cancelled. It was such a good show. I think that it was one of the best network shows!

Hi, We live in Australia, every week when the show was on all our Family kids & all were ready to sit down for one of our Favourite shows “Better Late than Never”. We thoroughly enjoyed every minute of the show & especially for our generation that grew up with “Happy Days” & “Star Trek”. We all laughed so much & Geoff blended in so well with all the guys.It was great to enjoy everyones individual humor & personal opinons, so down to earth, & our so loved stars from some the best years we were privileged to of grown… Read more »

Both myself AND my husband watched this show, which is amazing in itself, and found this to be the most refreshing and original programme we have seen, ever. We love the dynamic between the lads as they grew closer, and that they were up for everything, without “acting” any of it. The marketing for the U.K. audience should have been much stronger, because this genuine slapstick and honesty is right up our street. Shame on you for cancelling. Well done cast and crew. We are sad to see you go. We have been on tears through laughin. Thanks, and take… Read more »

Just catching the reruns. On demand.
Never saw it originally. It’s hilarious.
Fun to see..I would have named it
“We Ain’t Dead Yet”, however. I’ll be wanting more after I’m done
binge-ing. Sad nbc didn’t appreciate the vitality off older and wiser population.

Horrible choice by NBC!
GREAT cast, funny concept, and an always enjoyable script!!
Why must some young wannnabes wet behind the ears, screw things up for everyone else?
Bring back Better Late Than Never NOW!
Cancel the millennials making the decisions!!

The show was quite enjoyable and entertaining for most of my household, with some laughs and disgust from watching all the extremities that were taken throughout some of both seasons!
I wished there was more to come from this group of guys while traveling the world and discovering other hidden gems of traveling.

I really enjoyed this series. Wish you would bring it back.Iconic celebrities off on new adventures taking us with them. It was fun.

My wife and I really enjoyed Better Late Than Never shows. Laughed out loud funny, and were hoping for a 3rd one. These guys, all of them, were a real hoot, including Jeff! Please make another!