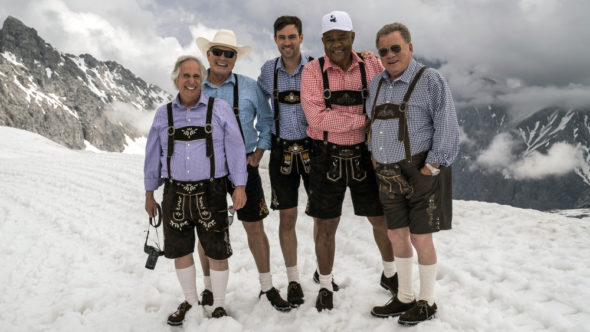 Tonight marks the second season finale of Better Late Than Never on NBC. The irrepressible senior quartet and Jeff are finishing their latest set of international adventures together. Should the peacock network send them out for a third season of adventures or, should they just stay home? Would you watch more of these crazy guys who refuse to “act their age”?

An NBC reality TV series, Better Late Than Never follows Henry Winkler, William Shatner, Terry Bradshaw, and George Foreman as they travel the world, with both help and misdirection from tech-savvy comedian, Jeff Dye. In the second season, the celebrities journey to Munich, Berlin, Lithuania, Sweden, Barcelona, Madrid, and Morocco. There, they’ll meet up with dozens of natives and guest stars including David Hasselhoff and Al Roker, as well as Björn Ulvaeus, of ABBA.

In its first season, Better Late Than Never aired over the Summer of 2016 and averaged a 1.58 rating in the 18-49 demographic with 7.31 million viewers. Those were pretty healthy numbers, especially for a summer series.

This time around, NBC decided to order twice as many episodes and aired them around the holidays and as filler leading up to the Winter Olympics. That scheduling didn’t work out too well for the boys and the ratings have seen a big drop. Compared to the first season, season two is averaging a 0.89 demo rating with 4.75 million. That’s down by 44% and 35%, respectively. It’s currently one of the network’s lowest-rated shows of the 2017-18 season.

It’s unclear if NBC will cancel or renew Better Late Than Never for a third season but the numbers aren’t looking good. What is clear is that a healthy percentage of the first season’s audience isn’t watching the show on Monday nights (our readers seem to still love it).

What do you think? Are you still watching this NBC series? Would you like to see a third season of Better Late Than Never or, do you think the series should be cancelled instead?

This was a great show and we never missed a week. We sure wish it was still on because it was our kind of humor!

This is a great show. Funny, entertaining and even educational. Is a shame to cancel such an enjoyable show!

“Better Late Than Never” is a GREAT show!! It’s so entertaining, teaches us about different cultures and is SO FUNNY!!!! My husband, our daughter, our grandchildren and I have watched it. PLEASE renew it!!!!!!!!

My husband and I love the show Better Late than Never. We are looking forward to a 23rd season. Please renew it!!!!!