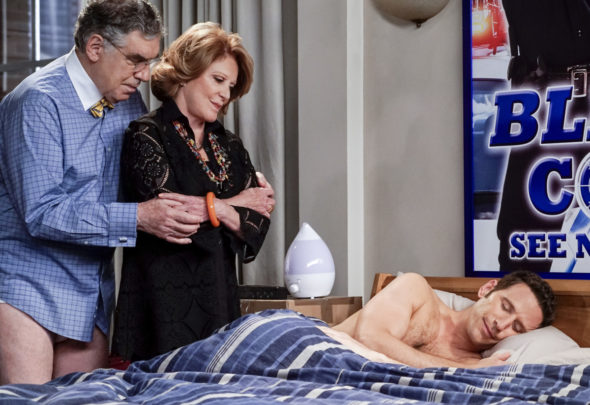 How well does the Roberts family respect Josh’s boundaries during the first season of the 9JKL TV show on CBS? As we all know, the Nielsen ratings typically play a big role in determining whether a TV show like 9JKL is cancelled or renewed for season two. Unfortunately, most of us do not live in Nielsen households. Because many viewers feel frustration when their viewing habits and opinions aren’t considered, we’d like to offer you the chance to rate all the 9JKL season one episodes here.

A CBS sitcom, 9JKL stars Mark Feuerstein, David Walton, Elliott Gould, Linda Lavin, Liza Lapira, Matt Murray, and Albert Tsai. From creators Dana Klein and Feuerstein — a married couple — this sitcom is loosely inspired by the time they spent living next door to Feuerstein’s family. It centers on newly divorced actor, Josh Roberts (Feuerstein), who moves from Los Angeles, back to his hometown of New York City. The only problem is, his apartment is sandwiched between those of his parents, Harry and Judy (Gould and Lavin) on one side, and his brother and sister-in-law, Andrew and Eve (Murray and Lapira), on the other. In addition to figuring out his next steps, Josh also has to establish some ground rules for his family, then teach them how to abide by them.

What do you think? Which season one episodes of the 9JKL TV series do you rate as wonderful, terrible, or somewhere between? Should CBS cancel or renew 9JKL for a second season? Don’t forget to vote, and share your thoughts, below.

Love JKL. Fresh, funny and not predictable. Wish it had not been cancelled.

I love this show. Watched it on tv then again on CBS all access. Why is it gone?

This was a good show they should have left it on the air. They always take off the good shows

My wife and I love watching this show! Keep looking for it! Please don’t cancel it! There is so much crap on tv it’s nice to watch something funny! Please bring it back!

I loved watching 9JKL and am very disappointed that it has not been on. Please do not cancel this show, it is far better than some of your other shows.