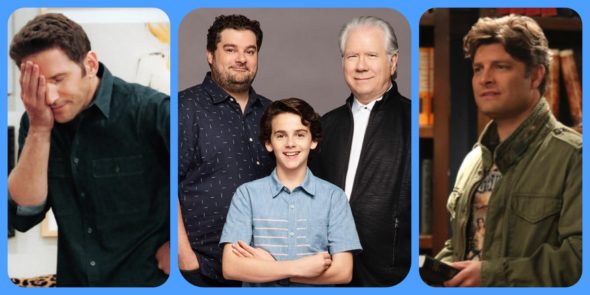 While CBS may have some of the biggest comedy series in primetime like The Big Bang Theory and Mom, the network has its challenges when it comes to establishing new ones.

CBS introduced four new sitcoms this season and their fates have already been decided. Young Sheldon has been renewed for a second season while Living Biblically, 9JKL, and Me, Myself and I have been cancelled.

As you might expect, their fates had a lot to do with the ratings. Young Sheldon airs after The Big Bang Theory and has done very well for the network. The other three have not been so fortunate.

Me, Myself & I was pulled back in October 2017 after six episodes had aired. It was averaging a 1.0 in the demo with 4.96 million viewers but the ratings were dropping lower each week. It’s unclear how many installments were completed but hopefully, CBS will release them at some point.

Living Biblically launched in February of this year and ran for eight installments before being yanked from the schedule. It was averaging a 0.70 in the demo with 4.21 million> The series was one of the network’s lowest-rated series. For the sake of its fans, let’s hope that the network will burn off the leftover episodes this summer.

9JKL was the luckiest of this cancelled trio in that CBS ordered three additional episodes and then let all 16 of them air. The show averaged a 0.96 rating in the 18-49 demo with 5.29 million viewers.

While the ratings for these three cancelled comedies weren’t strong enough to get them renewed, that doesn’t mean that they didn’t have millions of fans.

We’d like to know if you could revive one of these three sitcoms, which would it be? Please vote for your favorite below and let us know what you think.

Disappointment continues with CBS Scorpion, 9jkl, Living Biblically, all cancelled. Its like this network is wanting to force us to watch young Sheldon which sorry does not do it for me. I love the adult comedy from the other shows 9jkl had a wonderful cast. The three shows i listed above where different funny i can not believe they are all cancelled it makes you wonder why CBS is out of touch with their viewers. EVEN Seinfeld was not build in the ist season it took several for audiences to appreciate it. I guess as a viewer I just don’t… Read more »

Me, myself and I was a great show. I was so disappointed it was cancelled.

Me Myself & I was a great show. I was very disappointed CBS cancelled the show. Six shows was not enough. Instead you saved 9JKL a little longer. Now that was a stupid show. Bring back me myself & I.

None of them. I have boycotted all new CBS sitcoms, including each of “9JKL”, “Me, Myself and I”, and “Living Biblically” (as well as “Young Sheldon”, even though it’s already been renewed), ever since CBS declined to give “2 Broke Girls” a proper wrap-up season, which I am still bitter over. “The Big Bang Theory” will continue to be the ONLY CBS sitcom I watch.

Sorry, 2 Broke Girls was as air-headed as it’s main characters. If it wasn’t for the laugh track, you wouldn’t know when to laugh. I’m surprised how long it did last.

Hey, I actually liked “2 Broke Girls” and some of its characters, even the main two. Truth is, upon the cancellation of “2BG”, I swore that I would never get into another new CBS sitcom again. Should have gotten that farewell season of “2BG” instead of “Living Biblically” crashing and burning in the Nielsen Ratings.

Please save 9JKL… loved that show and it lasted the longest with millions of viewers!

michelle
Reply to  Trista A

I loved 9JKL. Believe me there is a lot of truth in that show.

I loved Me, Myself & I — it easily combined nostalgia and heart while also being relevant to issues folks have today and may have in the future as they age. The actors did a wonderful job as well. Comedy and drama done well in one show is hard to come by, I can’t believe CBS pulled this instead of allowing it time to flourish.

These TV shows showed a kinder side to CBS. In fact, these shows were closer to family shows like “Kevin Can Wait” and “Man with Plan.”

You’re right. They were more like “Kevin Can Wait” and “Man with Plan.” Worthless.

I would have saved 9jkl.I Loved all the actors and how they played off each other.

I would save 9JKL, I’m a long time fan of all the actors

I would save all of them.
CBS has the best comedies, so why do you cancel them?