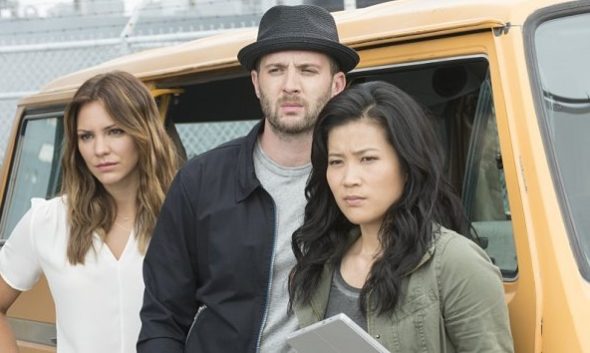 Scorpion just wrapped its fourth season, but will there be another? Should CBS renew the TV show for a fifth season for not? Do you want more adventures of this geeky crew?

It’s unclear if CBS will renew Scorpion for a fifth season. On the one hand, ratings have been pretty low for the series. Season four averaged a 0.81 rating in the 18-49 demo and 5.262 million viewers. That’s a nearly 30% drop in both ratings and viewership when compared to last season’s numbers.

On the other hand, CBS Television Studios is a producer on Scorpion, meaning the network has additional financial interest in picking up the show for another season. The show already has 93 episodes in the can and these days, that’s already enough for syndication.

Would you watch a fifth season of Scorpion on CBS? Should the network renew or cancel this show? Tell us what you think.

Somebody offer these actors enough money and bring Scorpion back or at least do a proper ending instead of a cliffhanger. I am going to stop watching television series until it’s all over and then only watch the shows that actually give us a proper ending. It’s like the networks have no empathy for their viewers

Why don’t they just bring Scorpion back as TV movies?

There should be another season to at least wrap up the plot lines. I was extremely interested in finding out what happens with everyone and how they left it unresolved.