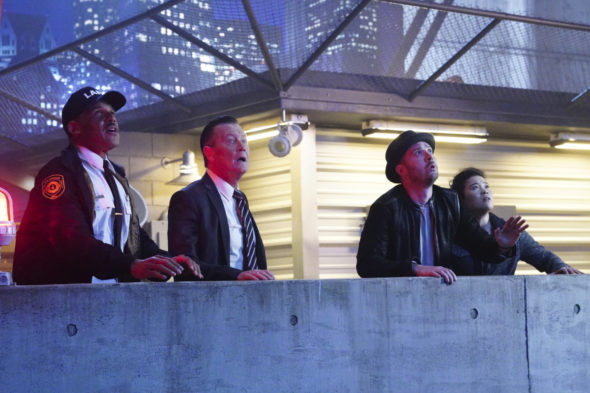 CBS has cancelled its Scorpion TV show after four seasons. The season, which began with a musical episode, weill be this series’ swan song.

Scorpion: A Look at the Ratings

The fourth season of Scorpion is averaging a 0.81 rating in the 18-49 demographic and 5.26 million viewers. Compared to season three, that’s down by about 32% and down by 27%, respectively. By both measures, Scorpion is consistently among the lowest rated scripted CBS TV shows.

Deadline has confirmed the Scorpion cancellation.

What do you think? Did you think CBS would cancel or renew Scorpion for season five? Now that it’s over, did it end at the right time, or should the network have given it another season to wrap up? Sound off, in the comments.

Hi so I’ve recently started watching Scorpion I binged watched it and am now on S4 Ep9 if I’m to be honest. I’m scared of finishing it as I’m aware it lands on a cliff hanger. It was a TV show that I felt like they were family. And it has a special place in my heart. I’m trying not to cry right now but we need a closure. We need at least one episode where we see what happens a film anything. I know that other people must of been watching Scorpion recently too. I’m not the only one.… Read more »

I have every episode on DVR still and watch marathons every weekend in POP TV. It was a good show and deserved at least a final season for closure. That was a serious cliffhanger. Bring it back… please?

I think the series gives misfit intellectual individuals a means to express their own worth. It is truly inspiring and with bulling be a high stake in the youth generation. Scorpion is by far a show I would love to see return