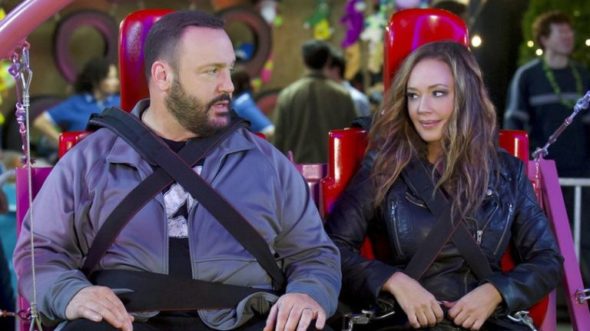 When it escaped today’s earlier cancellations, it looked like Kevin James might get a third season with his most recent sitcom, but that was not to be. CBS has cancelled the Kevin Can Wait TV show, and now the fans’ wait has come to an end. EP Andy Fickman broke the bad news. Check out his announcement, below.

Kevin Can Wait: A Look at the Ratings

Of the 27 CBS TV shows we’ve been tracking through the regular season, Kevin Can Wait ranked sixth in terms of its demo average, but sunk to 15th place, when we sort by average total viewership.

What do you think? Did you watch the Kevin Can Wait TV series? If it were up to you, would CBS have cancelled or renewed it for season three? Sound off in the comments.

Good deal because the show was awful in the second season Leah Remini is no longer funny at all. Not even sure King of Queens would work anymore with her.

If you want a show with Doug & Carrie on it, it’s got to be “The King Of Queens 2.0” life with their children, that would have been a hit!

King of Queens is one of my favorite shows but this show ‘Kevin Can Wait” lost me in the first season. Not really very funny and Kevin always seemed to be trying to hard to be funny … which he was not. Liked it somewhat better with his Wife the first season. Especially liked Chale, he was pretty funny and his oldest daughter. Although I like Leah, the match between the two didn’t work in this show. Just to forced.

Finally a show you can watch with family! I read the reviews and I’m no executive but I say this is a show you Save! Thank goodness less profanity and killing and sex!

I am very sad Kevin Can Wait has been canceled. Not many shows get me to laugh out loud anymore, and this one sure did! I will miss it terribly! Kevin and Leah were great together-like Lucy and Ricky- and I can’t believe this show did not make it!

Losing Hayes was the demise of this show. Still good, but not great.

great show!
Chemistry between Remini and James still amazing
Bas Rutten and Chale are hilarious all TLM Catholics.
It will be picked up by another network.

I think where this show failed is when they killed off his wife Donna I thought she was much funnier than oh what’s her face that played on king of Queen with him. You blew it BIG TIME!

Absolutely gutted Kevin can wait has been cancelled, its nearly as great as king of queens, kevin is a fantastic actor and soooooo funny, maybe ovver here in England we just get his humour better then his own country men and women, this show was great and i could only see it getting better, 2 seasons wasnt enough, big big m8stake CBS!!!!

Mistake! Corporate makes these kind of decisions and they dwindle until they are no more, more straws and nails. One less reason to watch CBS.

I admit I’m surprised. I thought it was doing okay.

Bring it back. Great sitcom and the only thing CBS had going for them on Monday nights. Bad call CBS. Now you have nothing worth watching. At least the show had good laughs and something to look forward for on Mondays. Please bring it back

James fired Hayes and then the audience fired James. Good to see that enough viewers stopped watching after season 1 in protest of the Hayes firing. Big mistake!

I was very disappointed that Kevin Can Wait was cancelled. I loved seeing Leah and Kevin again! I thought there performances were excellent together. Together again yes, but with a new twist! Please bring them back together again! Maybe a reboot of the King of Queens!