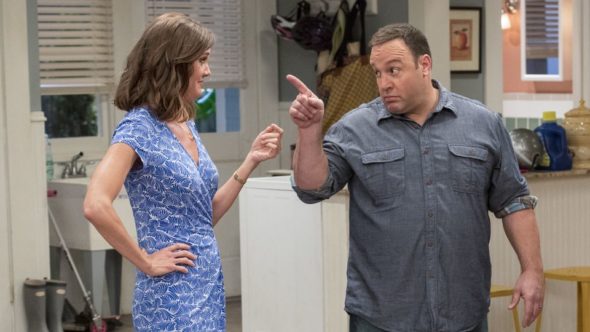 Why was Donna killed off on Kevin Can Wait? Recently, Kevin James spoke with the NY Daily News about Erinn Hayes’ departure from the CBS TV show, TVLine reports.

In the interview, James explained why Hayes was fired, saying Kevin Can Wait was running out of ideas:

It really felt like this was needed for this show to drive forward. The [premise] of the show didn’t have enough drive. If we got through a second season, I wouldn’t see us getting through a third one. We were literally just running out of ideas.”

Later, James revealed replacing Hayes with Remini was a no-brainer for the CBS sitcom.

When [Leah first] came on … it was just the greatest. Fans loved it, everybody on the crew loved it. We just knew right away, so we thought, ‘How can we get her here full-time to be on the show?’”

What do you think? Do you watch Kevin Can Wait? Do you think it was right to kill off Donna?

Sorry but there’s no chemistry between Kevin and Leah. Loved them in King of Queens, but stopped watching Kevin Can Wait after a few episodes this season. I know several others who feel the same way.

Leah Remini sucks! Why did you not just bring back King of Queens? Oh yeah, because she sucked then too. I have lost all respect for Kevin James letting this happen! The current series is great with the original Donna. If you question whether the series will continue to run into a third season maybe you should rethink your writing staff. Remini was not the fix but the nail in the coffin!

Sorry to say, the show was failing. It was the right thing to do for the show. The chemistry wasn’t there with Kevin and Donna. It’s seem Leah and Kevin pick up where they lefted off with their other show.

I one of the “not watching anymore” group. Show is not better with Erin gone. Kevin is just not that funny. Writing is too predictable and now that Leah is “back” it’s just old bits over and over. I tried but I’m still too upset with the whole cast and production company with Erin’s firing.

I had to stop watching the show after Erin was released. The way it was disgusting was ridiculous. In the first showed after her “ death”, Kevin showed little or no grief. Just not believable and definitely not funny any more. Removed my timer permanently.