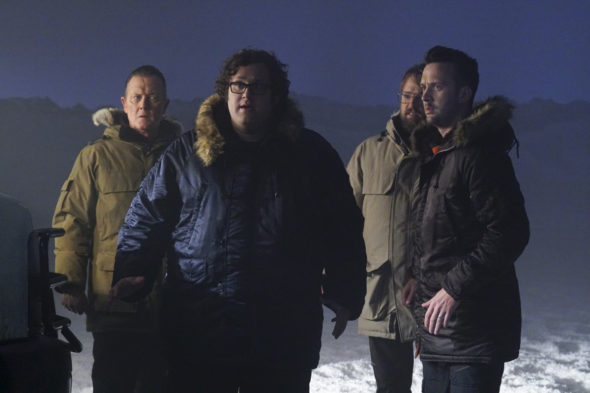 When a season kicks off with a musical, will the fat lady soon be singing? Is the Scorpion TV show cancelled or renewed for a fifth season on CBS? The television vulture is watching all the latest TV cancellation and renewal news, so this page is the place to track the status of Scorpion, season five. Bookmark it, or subscribe for the latest updates. Remember, the television vulture is watching your shows. Are you?

The series centers on Walter O’Brien (Gabel) and his team of brilliant misfits. They are the country’s last line of defense against lurking high-tech threats. As Team Scorpion, these members of Homeland Security’s think tank solve the nation’s crises, even as they help one other on their quest to fit in. At the start of season four, they find themselves working with their nemesis, Mark Collins (Leonard), to prevent the extinction of the human race. Meanwhile, Walter and Paige (McPhee) feel awkward as they try to navigate their new relationship.

The fourth season of Scorpion averaged a 0.81 rating in the 18-49 demographic and 5.26 million viewers. Compared to season three, that’s down by 32% and down by 27%, respectively. Find out how Scorpion stacks up against the other CBS TV shows.

Scorpion premiered with much lower ratings than last year and they’ve dropped pretty low since then. Not a good sign. I’m thinking that it will either be cancelled or renewed for a final year. I will update this page as the picture grows more clear. Subscribe for free updates on any Scorpion cancellation or renewal news.

5/12/18 update: CBS has cancelled the Scorpion TV show so there won’t be a fifth season. Details here.


What do you think? Should the Scorpion TV show have been cancelled? Would you have watched season five?

Please bring back scorpion series show if not CBS ,why not neflix to renew love the show