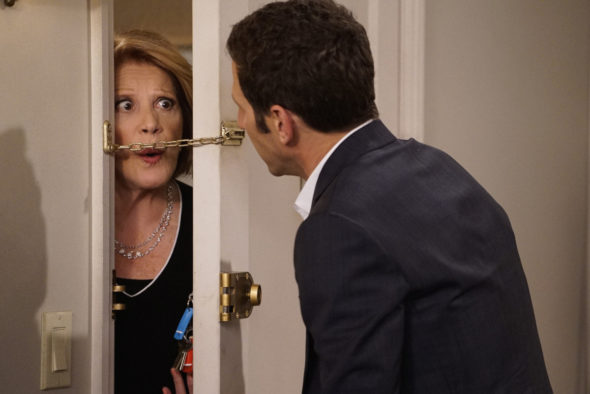 Has Josh’s family finally learned to give him his space? Is the 9JKL TV show cancelled or renewed for a second season on CBS? The television vulture is watching all the latest TV cancellation and renewal news, so this page is the place to track the status of 9JKL, season two. Bookmark it, or subscribe for the latest updates. Remember, the television vulture is watching your shows. Are you?

Airing on the CBS television network, 9JKL stars Mark Feuerstein, David Walton, Elliott Gould, Linda Lavin, Liza Lapira, Matt Murray, and Albert Tsai. From creators Dana Klein and Feuerstein — a married couple — this sitcom is loosely inspired by the time they spent living next door to Feuerstein’s family. It centers on newly divorced actor, Josh Roberts (Feuerstein), who moves from Los Angeles, back to his hometown of New York City. The only problem is, his apartment is sandwiched between those of his parents, Harry and Judy (Gould and Lavin) on one side, and his brother and sister-in-law, Andrew and Eve (Walton and Lapira), on the other. In addition to figuring out his next steps, Josh also has to establish some ground rules for his family, then teach them how to abide by them.

The first season of 9JKL averaged a 0.97 rating in the 18-49 demographic and 5.29 million viewers. Find out how 9JKL stacks up against the other CBS TV shows.

This newbie sitcom did pretty in the ratings when The Big Bang Theory aired on Monday nights. Once that high-rated show moved back to Thursdays, 9JKL’s ratings saw a significant drop. At this point, I believe that it will be cancelled. Subscribe for free updates on any 9JKL cancellation or renewal news.

4/20/2018 status update: The 9JKL TV show has been cancelled by CBS, so there will be no season two. Details here.


What do you think? Did you think the 9JKL TV show would be renewed for a second season? How do you feel, now that CBS has cancelled this TV series?

We love this show. Why are the good shows always canceled? Get rid of the trashy reality shows.

We love this show. Good clean fun, must be why cancelled, not enough sex or dirty words for the Younger demographic.

Please bring back 9JKL – it’s one of the best comedies out there! Love it. It should not be cancelled. Has a huge following of people I know…

Please don’t cancel this show. I love 9JKL! The family is crazy and the doorman puts the show over the top. Give it a good time period and leave it alone so viewers can find it.

This show is very funny. I love it. Superiour Donuoughts shoud be cancelled

Omg I love this show 9jkl is hilarious!! Bring it back for season 2!!!!

This is one of the funniest shows on tv. I laugh out loud every time I watch it. It is so well written and has so much heart. I really hope it gets renewed, it NEEDS to be renewed.

Please do NOT cancel 9JKL, one of the most well written, well cast, and brilliantly performed comedies on TV. Who can possibly rival Linda Lavin’s and Elliot Gould’s comedic style and talent, not to mention the entire cast—-a great ensemble.
I especially love the hilarious doorman and the brother’s role.