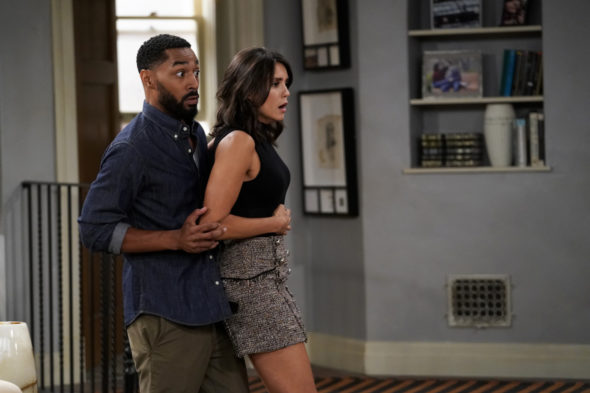 Is CBS keeping it in the family? Has the Fam TV show been cancelled or renewed for a second season on CBS? The television vulture is watching all the latest TV cancellation and renewal news, so this page is the place to track the status of Fam, season two. Bookmark it, or subscribe for the latest updates. Remember, the television vulture is watching your shows. Are you?

A CBS family sitcom, Fam stars Nina Dobrev, Tone Bell, Odessa Adlon, Sheryl Lee Ralph, and Brian Stokes Mitchell. It centers on Clem (Dobrev), who overcame a rough start and is now living her best life with fiancé Nick (Bell) and his wonderful family. When her younger half-sister, Shannon (Adlon), shows up, in need of respite from their dad, Clem and Nick take her in, with the hopes of teaching her how to avoid the pitfalls which once tripped up Clem.

The first season of Fam averaged a 0.89 rating in the 18-49 demographic and 5.60 million viewers. Find out how Fam stacks up against the other CBS TV shows.

Will CBS cancel or renew Fam for season two? The numbers haven’t been great so, at this point, I suspect it will be cancelled. I’ll update this page with breaking developments. Subscribe for free Fam cancellation or renewal alerts.

What do you think? Do you like Fam TV series on CBS? Should it have been cancelled or renewed for a second season?

The Fam was a show that I really enjoyed watching.. It was real life with the mixed marriage, the teenage sister and the crazy dad.. Something we could all relate to in one way or another. I was very sorry to hear it was cancelled.

There are not many shows on CBS that watch from week to week. Everytime CBS has a show that catches my interest, that is funny and family oriented, that keeps me going back from week to week, they cancel the show. I cannot believe this show was not picked up for season 2.

I am sad that the show was not renewed i am not much of a sitcom watcher, but I enjoyed watching Fam every week it was always so funny and fun to watch. I wish they would of brought it back

Everytime I love a show it gets canceled. I am not going to watch anymore new series. You watch you love then they get canceled. I love Fam now it’s gone.

My hubby and I love this show we literally lol please bring it back thank you!!!!

My hubby and I love this show we literally lol please bring it back!!!!!

Lease Rene this show I love it! Me and my hubby literally lol

Loveee the show! Renew for sure❤

It cracks me up renew it!

Fam is a very cute show. It’s up beat, funny, the actors are very good. I say Renew It!

Renew!
One of the few shows on that I actually enjoy watching.
Odessa Adlon is fresh and funny as hell

I just started watching FAM on CBS all access and want it renewed. Great story lines backed up by great cast. Great chemistry, totally enjoyable and uplifting. We need something like that ligthearthted show considering what is going on around us lately.

I really like watching this show. I am hoping when season 2 get renewed, it’s more than 13 episodes. Please renewed this show thank you..