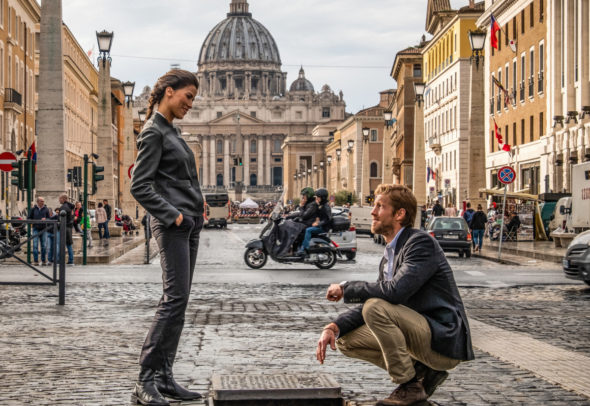 Are Danny and Lexi still on the job? Is the Blood & Treasure TV show cancelled or renewed for a second season on CBS? The television vulture is watching all the latest TV cancellation and renewal news, so this page is the place to track the status of Blood & Treasure, season two. Bookmark it, or subscribe for the latest updates. Remember, the television vulture is watching your shows. Are you?

Will CBS cancel or renew Blood & Treasure for season two? The ratings are very low so, at this point, I think it’s unlikely this series will be renewed. I’ll keep an eye on the Nielsens and update this page with breaking developments. Subscribe for free Blood & Treasure cancellation or renewal alerts.

What do you think? Do you like Blood & Treasure TV series on CBS? Are you glad tha it’s been renewed for a second season?

Please renew Blood and Treasure. It’s a show that is smart, funny, and keeps you thinking.

We love Blood and Treasure! So glad it got renewed. Hopefully the powers that be will keep making good decisions.

Is the show really filmed on location in Rome, Cairo etc. or are they Hollywood sets or CG ?

The show was just renewed for for a second season.

It’s one Of The Best New Shows on TV Right Now !!!

My wife and I like the show. Lots of action…do not cancel…

The show is awful. Cancel.

love the SHOW DONT cancel I LOVE THE places go.

Damn, they only showed one episode and we’re already talking about cancellation/renew.

Yes do not cancel blood and treasure