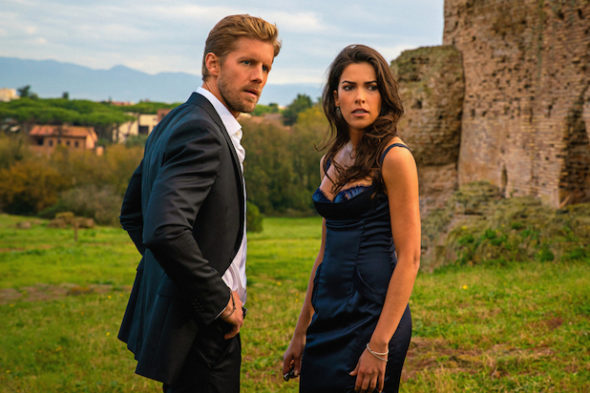 It’s not that surprising that CBS has renewed Blood & Treasure for a second season. Since its debut in May, the series has averaged a .49 rating in the 18-49 demo and 4.357 million viewers, making it the network’s top-rated scripted summer series.

“BLOOD & TREASURE is a fun, escapist adventure with comedic elements filmed in multiple locales around the world that has been a great performer and a wonderful addition to our summer schedule,” said Amy Reisenbach, Executive Vice President, Current Programs, CBS Entertainment. “We’ve heard the story pitch for season two and look forward to seeing all-new exploits from Russia to Southeast Asia next year.”

The series is currently the #1 new summer scripted series with 5.71 million viewers while improving its time period by +17% over the same time slot in summer 2018.

BLOOD & TREASURE is a globe-trotting action-adventure drama about a brilliant antiquities expert and a cunning art thief who team up to catch a ruthless terrorist who funds his attacks through stolen treasure. Danny McNamara (Matt Barr) is a former FBI agent specializing in stolen arts and antiquities. Lexi Vaziri (Sofia Pernas) is a resourceful art thief who is haunted by the tragic loss of her father, which she blames on Danny. As they crisscross the world hunting their target, Danny and Lexi unexpectedly find themselves at the center of a 2,000-year-old battle for the cradle of civilization.

What do you think? Have you seen Blood & Treasure? Will you watch season two?

LOVE THIS SHOW! SOMETHING DIFFERENT!

Keep it. One of most engaging, sophisticated shows on TV. Writing, locales, players, sets, designs.

Show it. Show it. Seasons X more please. One of most engaging sophisticated on TV. Oops carried away. delete plz

Love the international scenes, actors, story. Can’t wait to see season 2. Great work CBS! NO OTHER SHOW LIKE IT ON TV!!!!!!

I love them. Very interesting to see the different places that they go. Keep the show going. One of the best new shows on TV.