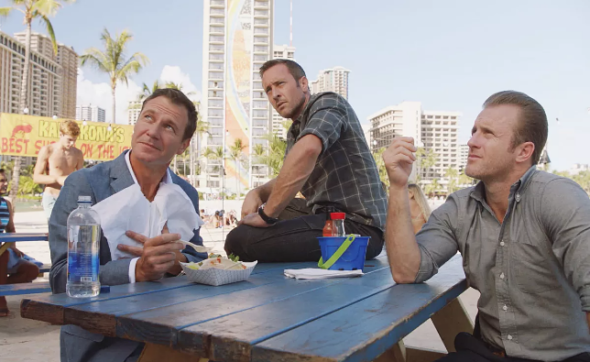 Hawaii Five-0 has been a solid performer for CBS for nearly a decade now, so it’s no surprise the show’s been renewed. So far, season eight is averaging a 0.99 rating in the 18-49 demo and 8.559 million viewers.

What do you think? Do you watch Hawaii Five-0? Are you glad CBS has ordered another season?

So glad that Hawaii Five-O is renewed for season 9. I love this show and the chemistry between Alex and Scott.

If they cancelled #H5O I would definitely be upset or lost any of the cast !!!

Bring back Cath and Steve romance!! They were perfect for each other and many of the reasons why I still watch it. My little heart can’t take the fact that Kono and Chin left, so don’t take the chemistry between cat and steve away

I love Hawaii Five o but I really want to see Grace Park brought back. She was by far my favorite one on the show.

So glad they renewed Hawaii Five O, and Alex is staying. I’ve been an Alex Oloughlin fan since Moonlight, and haven’t missed a single episode of any of his shows, or movies. Alex is the perfect for this role and the show wouldn’t be the same without him. Good move CBS.

I have been a Alex O’Loughlin fan since 2009 Three Rivers up to now with him playing Steve McGarrett on Hawaii Five 0. I hope good things are in store for him on season 9.TEAM ALEX now and forever

Will Alex be in the new season? That is the main question.

I am glad there is a new season, but only if there is Alex. If not I will not watch it.

TEAM ALEX ALL THE WAY

I’m glad they renewed. I love the show!!

Is Alex coming back for season 9?

Yep Alex decide give if another year he said.