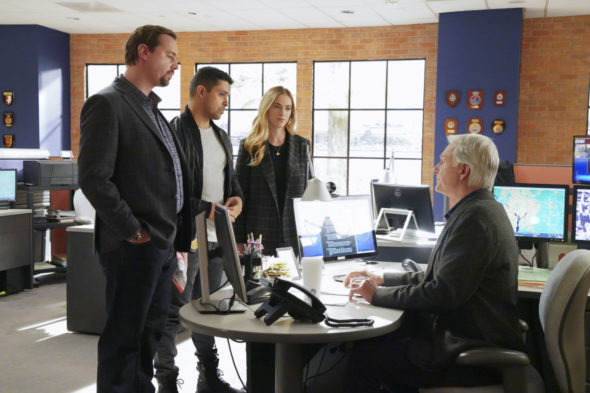 Okay, while no one actually thought it would be cancelled, we’re still happy to report CBS has renewed its NCIS TV show for a 16th season. In addition, the Tiffany Network has re-signed Mark Harmon, who stars in and executive produces the show. Although the ratings have dropped some in season 15, the “mothership” of Donald P. Bellisario and Don McGill’s successful franchise sails on — full steam ahead. As previously reported though, Gibbs and the team will have to sally forth without Abby Sciuto, since star Paula Perrette decided season 15 would be her final installment.

NCIS: A Look at the Ratings

The 15th season of NCIS is averaging a 1.43 rating in the 18-49 demographic and 13.12 million viewers. Compared to season 14, that’s down by 17% and 10%, respectively. Out of the 22 scripted CBS TV shows we’re currently tracking, NCIS ranks fourth when we sort by demo numbers and rises to second place, in terms of average total viewership.

Learn more about the NCIS season 16 renewal from this CBS press release. 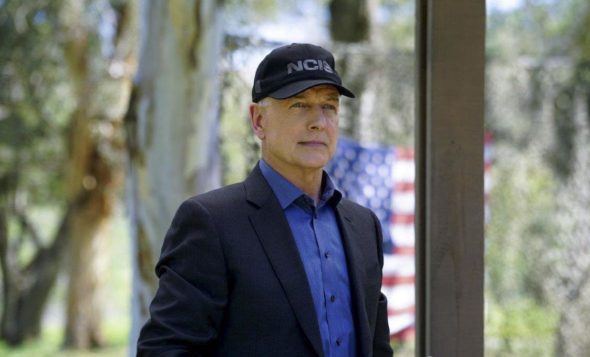 CBS announced today that it has renewed NCIS, the Network’s #1 drama and the most-watched drama in world, for the 2018-2019 broadcast season. Additionally, series star and executive producer Mark Harmon has signed a new agreement to continue with the show.

“It’s pretty simple – viewers everywhere love NCIS,” said Kelly Kahl, President, CBS Entertainment. “This show speaks to viewers of all ages, in all parts of the country and around the world. NCIS’ amazing characters and terrific storytelling result in some of TV’s most passionate fans. Of course, none of this would be possible without an outstanding production team, and talented cast led by the incomparable and absolutely tireless Mark Harmon. We’re thrilled he is returning as the centerpiece of the show, and we could not be more excited for NCIS’ 16th season.”

This season, NCIS is averaging 17.0 million viewers and is one of the top five most-watched shows on broadcast television. On the digital front, NCIS is one of the most-watched primetime series across CBS’ digital platforms, including CBS All Access and in the Electronic Sell Through (EST) market. The series also continues to be a powerhouse in the global market, licensed in more than 200 territories. It currently holds the title of “the most-watched drama series in the world,” having received the International Audience Award by Eurodata TV Worldwide and the Monte Carlo Television Festival.

NCIS premiered on CBS in 2003. During the 2009-2010 broadcast season, it became the #1 drama/scripted program on television, and has remained the #1 drama every season since.

What do you think? Are you still a fan of the NCIS TV series? Did you think CBS would cancel or renew it for season 16? How long do you think it should run? Let us know, below.

This has been a great series right from inception. Do hope it continues along with the other NCIS spin-offs.

I have watch this from the very beginning. I do not wat it cancelled as this is the only show I watch. If you take it off the air, I would cancel my TV service which is proof that I am a great fan of this show. What is the new day and time that it would air.

I have watched this show from the beginning and would like it renewed. What would be the new time and day it is on?

My husband and I have watch this show from the beginning. We only missed last week show. Last night we where excited to see how the new season was going. We didn’t watch long, my husband said Gee he got up and left the room. I said is it ok if I turn the channel. He said so you don’t like it either? I said no. It was not good, it has lost it’s polish, sad. We decided just to watch old reruns. Being military we know what the dress code it and what the work place is like. This… Read more »

I also don’t care for the new person replacing Abby, but with that being said Abby will be very difficult to replace. I still love NCIS and am really hoping they can pull it off.

I do not like the new person on NCIS who is replacing Aby I haves been a fan of NCIS since day one but will not be watching the new seasons unless she gets replaced..