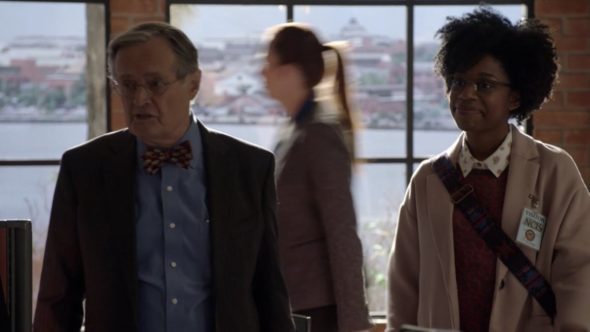 Kasie Hines is moving on up. Deadline reports Diona Reasonover has been promoted to series regular for season 16 of CBS’ NCIS.

Reasonover will now be a regular on NCIS beginning with the CBS series’ upcoming 16th season, which premieres on September 25th.

What do you think? Do you watch NCIS? Are you looking forward to the new season?

No one can really FILL Abby’s shoes, but Reasonover should be a good addition to the group. It is like a real-life workforce….people move on and others come in. While I will MISS Abby’s character sometimes new faces and new personalities is good for a show.

I agree with you totally; I love this show!!!

We watch every episode of NCIS and all reruns. I do not believe the lady is the right person for that position on the show. She doesn’t fit in with the other characters. Abby’s character will be impossible to replace in my opinion.

Too many changes in cast

She is no Paulie

I think Kasie makes a great addition to the team. She is very endearing and will fill Abby’s shoes well. I’m looking forward to seeing more of her.

I found her character to be uncomfortably perky. I don’t think all that hugging would be appropriate in the workplace today. I would not care to be hugged at work.
You may have noticed that Gibbs no longer wacks people in the back on their heads. Maybe that is because it is actually assault. Those who got hit always grimaced or said ouch. That is assault and I doubt anyone would be okay with getting wacked in the head at work or anywhere else.
She is just annoying. I hope they can tone down her character.

I agree to perky, it would be a great addition I think , if they tone her down a bit.

I love all of the NCIS shows. The writers and actors are great. Just wish the local networks felt the same as they continue to move the programs to later oddball times. Can’t CBS do something to stop this from happenine?

Love NCIS
Actually, really like all of the NCIS shows.

Great news. I think she’ll be a good addition to the team. She’s fun and feisty.

Marie Bella needs to go. Jackie just does not fit in with the team.

She isn’t a great character but she is okay.