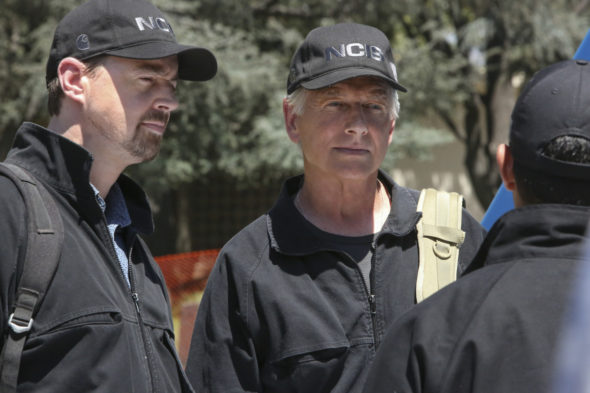 Is Special Agent Gibbs still at the top of his game in the 15th season of the NCIS TV show on CBS? As we all know, the Nielsen ratings typically play a big role in determining whether a TV show like NCIS is cancelled or renewed for season 16. Unfortunately, most of us do not live in Nielsen households. Because many viewers feel frustrated that their viewing habits and opinions aren’t considered, we’d like to offer you the chance to rate all the season 15 episodes of NCIS for us here.

What do you think? Which season 15 episodes of the NCIS TV series do you rate as wonderful, terrible, or somewhere between? Should CBS cancel or renew NCIS  for a 16th season? Don’t forget to vote, and share your thoughts, below.

The 15th season of NCIS was a strong season , yes it was sad to see Abby go from the show but now it will bring new people into the show . The last two season are a hell of a lot better than season 13 , that was a week season with the actress who was in it for one season (sorry can’t remember her name) , but I didn’t think she was right for the show , but they have made up with 14 and 15th season . I can’t wait to watch the 16th season of one… Read more »

It is my all-time favorite show! Hopefully, it will be back for Season 17!

I am disappointed that CBS allowed Pauley P….IE…Abby to leave..she MADE that show…although the exit episode was excellent…I am deeply sadden with Abby’s leaving…I am hoping that “Not Goodbye…just goodbye for now” means Abby will return sometime before the show leaves the air…Mark Harmon needs to seriously apologize to Pauley and get her back!!!
ABBY WILL BE MISSED!!!!

Love this show. Characters change and somehow the new ones end up being strong. One of best shows on TV

I am going to miss Abby and Clayton, but we have lost many loved characters in the past, including some that (Jennifer Esposito’s character) were there for too short a time. I want the show to continue, but wonder if there isn’t some issue with the producers of these NCIS shows losing so many actresses quickly lately. For example Jennifer Esposito, Zoe McLellan, and Shalita Grant. Is there some “Me Too” issue going on on these shows?

i just deleted 32 shows I had in my DVR… just never seemed to get around to it. I love her in a role that doesnt sex her up or make her dipsy) but the shows just seem like repeats of each other. so… yea, it went in the trash chocked up to I saw that episode before, didnt I?

Love this show. Hope it continues for ever.