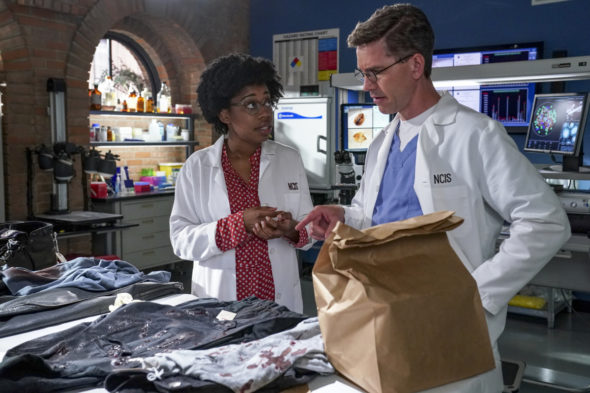 Are Gibbs and company still up to the job? Is the NCIS TV show cancelled or renewed for an 18th season on CBS? The television vulture is watching all the latest TV cancellation and renewal news, so this page is the place to track the status of NCIS, season 18. Bookmark it, or subscribe for the latest updates. Remember, the television vulture is watching your shows. Are you?

The 17th season of NCIS averaged a 1.12 rating in the 18-49 demographic and 11.65 million viewers. Compared to season 16, that’s down by 8% in the demo and down by 4% in viewership. Find out how NCIS stacks up against the other CBS TV shows.

Will CBS cancel or renew NCIS for season 18? Unless something unforeseen happens, I’m sure it will be renewed. I’ll keep an eye on the Nielsens and update this page with breaking developments. Subscribe for free NCIS cancellation or renewal alerts.

What do you think? Do you like NCIS TV series on CBS? Are you glad that it’s been renewed for an 18th season?

As a viewer, we never know when programs are on and if they are they are repeats. They kill stars off why woukd we watch anymore. They put so many commercials in that you lose the plot when it returns.

Please boost ratings been lower in few years need more ratings people so good love it. So happy back on I can’t wait to watch it every episode.

We can hardly wait for NCIS to start again!!! Please let us know when it’s coming

I really enjoy NCIS and the other two also but NCIS is my favorite hopefully it will be on the air for a very long time. Thank you for a great show.

YES! NCIS is still my favorite #1 show! I hope it continues for years to come! Maybe Ziva will be on some more episodes? Either way, I still love NCIS! And I always record it so that I can watch it over again. It’s a shame that NETFLIX dropped NCIS beginning with season 16! I hear HULU might have all seasons! If so, I’ll drop NETFLIX for HULU so that I can rewatch all of the seasons when NCIS is not on!

I love this show!!!! I watch all the reruns and new, cannot get enough of Gibbs and crew.

It’s the only reason CBS is my favorite network. Unlike NBC and ABC, they know their audience, they know entertainment and they renew our favorite shows. When Emergence was cancelled, I decided to cancel my cable service and stick to internet TV thru my Roku. I haven’t watched cable TV in several weeks. Every good show is either on Hulu or Netflix in rerun or from the beginning. I am going to save SO MUCH MONEY dumping cable. The Networks, except CBS are on their way out with every popular show they have on for 12 episodes and cancel them.… Read more »

I think NCIS is still the best show going

its been long enough has NCIS been renewed for 2020/2021? enough is enough let us know? we look forward to the show every Tuesday. Wish they would have reruns on more ofter too.

NCIS has been renewed for an 18th season. NCIS: Los Angeles and NCIS: New Orleans were also renewed.

How do you know all 3 Ncis’s have been renewed?

I agree! NCIS used to be on USA so much but not anymore! I might get HULU and watch all of the NCIS RERUNS AS WELL!