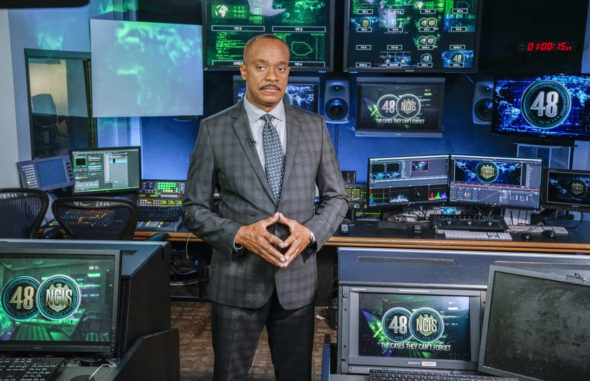 Is it smooth sailing, from here on out? Has the 48 Hours: NCIS TV show been cancelled or renewed for a third season on CBS? The television vulture is watching all the latest TV cancellation and renewal news, so this page is the place to track the status of 48 Hours: NCIS, season thee. Bookmark it, or subscribe for the latest updates. Remember, the television vulture is watching your shows. Are you?

A CBS true crime docu-series, 48 Hours: NCIS centers on true crime cases handled by the real U.S. Naval Criminal Investigative Service. Rocky Carroll narrates the news magazine, which features actual NCIS agents sharing the investigation techniques they use in cases including murder, fraud, and terrorism. The series delves into the sorts of real cases that have inspired the NCIS, NCIS: Los Angeles, and NCIS: New Orleans dramas — ones the agents will never forget.

Despite shallow ratings last year, this show managed to sail to a season two renewal. I’ll keep an eye on the Nielsens, but they won’t tell the whole story here. As a news division program, 48 Hours: NCIS is cheaper to produce than the NCIS drama franchise, while also being something of an advertisement for it. Additionally, it extends the 48 Hours brand into the off-season. Keep that in mind, as the numbers roll in. I will update this page with breaking developments, so subscribe for free 48 Hours: NCIS cancellation or renewal alerts.

5/17/19 update: CBS has renewed 48 Hours: NCIS for a third season but changed the title to NCIS: The Cases They Can’t Forget.

What do you think? Should CBS have renewed this TV show for season three? Should it have been cancelled instead?

Renwed it even though short season real cop story series