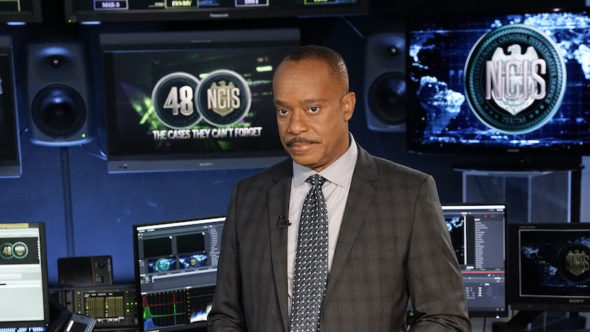 Is the TV audience hungry for another news magazine series? Has the 48 Hours: NCIS TV show been cancelled or renewed for a second season on CBS? The television vulture is watching all the latest TV cancellation and renewal news, so this page is the place to track the status of 48 Hours: NCIS season two. Bookmark it, or subscribe for the latest updates. Remember, the television vulture is watching your shows. Are you?

Airing on the CBS television network, 48 Hours: NCIS centers on true crime cases handled by the real U.S. Naval Criminal Investigative Service. Rocky Carroll narrates the TV show, which features actual NCIS agents sharing the investigation techniques they use in cases including murder, fraud, and terrorism. The series delves into the sorts of real cases that have inspired the NCIS, NCIS: Los Angeles, and NCIS: New Orleans — ones the agents will never forget.

The first season of 48 Hours: NCIS is averaging a 0.55 rating in the 18-49 demographic and 4.67 million viewers. Find out how 48 Hours: NCIS stacks up against the other CBS TV shows.

This docu-series draws very low ratings. However, much like reality series, news magazines are far cheaper to produce than scripted dramas and comedies. Though it doesn’t cost CBS much to produce, I suspect they’ll cancel NCIS: 48 Hours and look for something else. I’ll keep an eye on the ratings and update this page, periodically. Subscribe for free updates on any 48 Hours: NCIS cancellation or renewal news.

What do you think? Do you hope the 48 Hours: NCIS TV show will be renewed for a second season? How would you feel if CBS cancelled this TV show, instead?

Really enjoy this program. Sincerely hope it has not been cancelled. Have not seen it in the schedule lately though. Please keep it going.

Really like 48 Hours:NCIS. I hope it will be renewed.

I just watched a taped recording of episode about serial rape tonight 5/23/2018 And the woman did not know how to pronounce Camp Lejeune the right way and the other NCIS agent did not as well.

My wife and I both really enjoy this show and the detail investigators go to solve a case. We like the genre of 48 Hours, Live PD, Nightwatch, etc. I admit we are both Seniors but CBS needs to remember that our demographic spends a lot of money also! Please, please! Renew it!

Interesting show. A little different from the similar fare in that it provides insight into NCIS, a little known agency to the general public until the various NCIS Series’ took hold of the minds and imaginations of the viewership of collective millions. However, I would like to see even more of the agents and their techniques, tricks, gadgets and methodologies of this agency which, as previously stated, sets this Series apart from the other “true life crime” Series’. Let’s have more NCIS info and strategy and a bit less of the unnecessary detail on the crimes, i.e., focus on the… Read more »

I can’t get enough of these shows! I loved American Justice, Cold Case, City Confidential, 48 hours and Dateline etc. So I hold on to hope they won’t cancel it.

I watch a lot of shows on the network. I don’t remember this show at all.

I thought it was a one-off. I probably would not watch it very often as a series. But, since I am not in the target age group, I may not count. Oh, well.

This show was not properly promoted. I found it was on by accident. Give people that DIDN’T know it had aired yet, a chance to watch it, before y’all decide to cancel it.

I WAS NOT EVEN AWARE IT HAD PREMIERED. WERE THERE ANY COMMERCIALS?