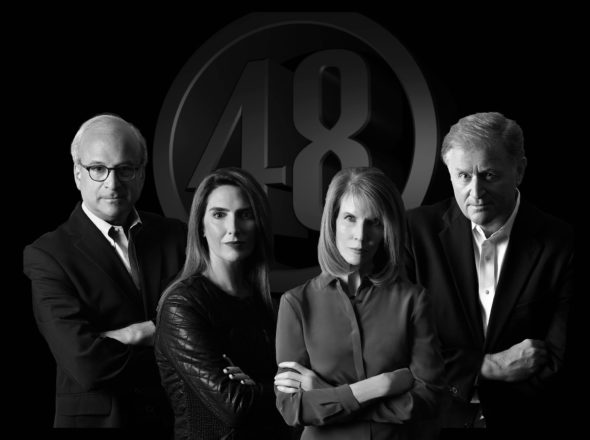 Are we out of time? Is the 48 Hours TV show cancelled or renewed for a 31st season on CBS? The television vulture is watching all the latest TV cancellation and renewal news, so this page is the place to track the status of 48 Hours, season 31. Bookmark it, or subscribe for the latest updates. Remember, the television vulture is watching your shows. Are you?

Airing on the CBS television network, 48 Hours is a documentary news program that takes a deep dive into stories which usually center on issues of law, crime, and justice. Correspondents in its 30th season include regulars Erin Moriarty, Peter Van Sant, Maureen Maher, Richard Schlesinger, and Tracy Smith, as well as occasional reports by other CBS News reporters.

Even though the ratings have fallen throughout the years, comparing 48 Hours to weeknight scripted or reality programming, or even to that Sunday night stalwart, 60 Minutes, isn’t a fair fight. The network has given the series a new look this season and is putting “a new emphasis on taking viewers inside stories that matter and the journey for the truth”. A bigger shake up could be ahead if the ratings drop further but I expect this venerable program will be renewed for a 31st season either way. I’ll keep an eye on the Nielsens and update this page with any developments Subscribe for free updates on 48 Hours cancellation or renewal news.

What do you think? Are you glad that the 48 Hours TV show has been renewed for a 31st season? How would you feel if CBS had cancelled this TV series, instead?

What an absolute shame!. I learned so much about law enforcement and forensic science watching this show!. It shows that no matter what kind of life you’ve lived the detectives stop at nothing to bring victim’s of violet crimes families justice. People need to know how hard their jobs are. I hope it’s not political pressure causing this.

I’m disappointed! This to find out that the series has been cancelled. This is a good series & we enjoy watching it very much. Please reconsider!

What do you mean cancelled? It was renewed for September.