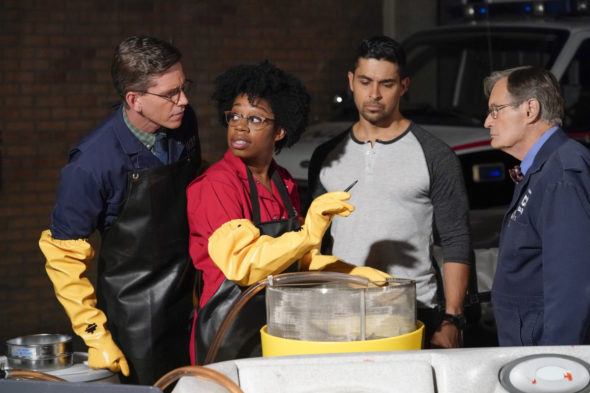 How long will Gibbs and his team remain on the job? Has the NCIS TV show been cancelled or renewed for a 17th season on CBS? The television vulture is watching all the latest cancellation and renewal news, so this page is the place to track the status of NCIS, season 17. Bookmark it, or subscribe for the latest updates. Remember, the television vulture is watching your shows. Are you?

Will CBS cancel or renew NCIS for season 17? I have a hard time believing that this show will end until Harmon wants to call it quits but, you never know. Still, I’ll keep a hungry eye on the ratings and update this page with breaking developments. Subscribe for free updates on any NCIS cancellation or renewal news.

What do you think? Are you glad that NCIS has been renewed for a 17th season? How would you feel if CBS had cancelled this TV show, instead?

I am thrilled that NCIS has been renewed. I love all the characters on the show. I watch it all the time and I’ve started watching all the episodes again. It is the best show to watch. Please keep renewing it.

I love ncis!!! Even though the glory days are over, it still can’t be beat and is my all time favorite program. The best stand alones were with Kate in the first 2 seasons, but Ziva had the greatest continuing episodes.

I also stopped watching when Ziva left, she was that role. The producers do not deserve a top rated show with the decisions they have made regarding casting. The new forensic replacement acting like Abby is an affront to viewers intelligence, the replacement for Ziva also miscast, not believable she could possess the experience written for the part in her age category. New characters have been miscast. Hire the original casting crew back & start from scratch. New characters should not be clones of their betters. Tony & Ziva were the show.

We enjoy NCIS, but I wish they would eliminate the talking to his dead wife, boring!

I love this show! Mark Harmon is awesome! The cast changes through the years have been an adjustment because this show is an icon; therefore, when they leave, it hurts. However, to be going on the 17th season is astronomical. Thanks to CBS for renewing this show! Best on TV!

great this is my favorite TV show

Ncis has renewed for season 17 today

Yeah!!! This is my favorite show.

I hope NCIS will be renewed. It is one of my favorite shows. Even with cast changes, the show is No. 1 in my book. It was sad to see Abby leave but I really like Casey and the charm and wit she brings to the show in her interactions with others. I hope this show is never canceled.

I agree. It was sad to see Abby leave but Casey is great too. She has her own funny quirks and is comical also.

I believe NCIS would gain so much more interest and viewers if they were to bring back Ziva – especially now that there is a teaser out there about her being alive. As a matter of fact, bring back all the surviving team.

I’m afraid since Ziva is not cast as a full-time character, she may be another ‘dead’ character appearing now & then.

I truly hope Mark Harmon sticks with it at least1 or 2 seasons because when he decides to hang it up and walks away the show has to end because there will be no more ratings. You can’t replace Harmon even if they were to bring in a new character to lead the team or even if they were to make an existing character the team leader in my opinion the show wouldn’t have the same affect it took a couple seasons for me to regain interest interest when DiNozzo left it broke my heart when Ziva left but I… Read more »

I agree. Mark Harmon is the show. Hope he signs a contract for more than 2 years.

I think it should have been canceled as soon as they got rid of Ziva but when Abby left that was the end as far as I’m concerned. As a person who never missed an episode; I couldn’t care less now if it were cancelled. The reruns are better than the current show!

I love the replacements for Ziva and Abby. They have their own personalities. Give them a chance.

Please renew. I love this show!!

The only reason I pay for satellite TV is for NCIS. If there is not a season 17 I will cancel my TV service.

I think it is time for Gibbs to hang up his hat. It’s about time to end this series. They have lost too many of the main characters and several more plan to leave. I have loved this show and watch it faithfully every week. I just think it has had a good run but it is time to call it quits.

This show must be renewed for many more seasons. I watch it every week faithfully.