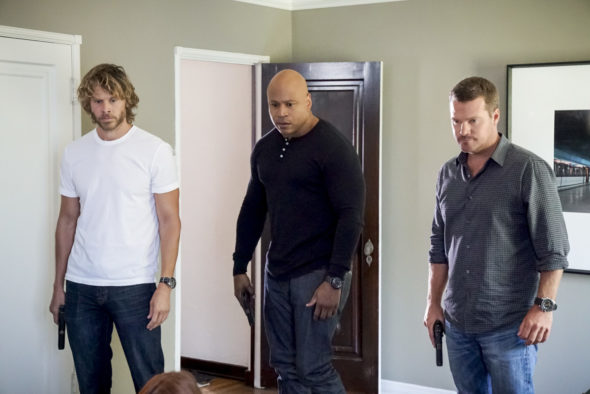 Will Callan and Hanna’s tight-knit team stick together? Is the NCIS: Los Angeles TV show cancelled or renewed for a 10th season on CBS? Telly the television vulture is watching all TV cancellation and renewal news, so this page the place to track the status of NCIS: Los Angeles, season 10. Bookmark it, or subscribe for the latest updates. Remember, the television vulture is watching your shows. Are you?

The ninth season of NCIS: Los Angeles is averaging a 0.91 rating in the 18-49 demographic and 7.90 million viewers. Compared to season eight, that’s down by 31% and down by 22%, respectively. Find out how NCIS: Los Angeles stacks up against the other CBS TV shows.

Will CBS cancel or renew NCIS: Los Angeles for season 10? If last year’s numbers are any indication, I think a renewal is in the offing — as long as all parties can agree on money. For now, I’ll keep an eye on the Nielsens and update this page with breaking developments. Subscribe for free updates on any NCIS: LA cancellation or renewal news.


What do you think? Are you glad that CBS has renewed its NCIS: Los Angeles TV show for a 10th season? How many more seasons should this TV series run?