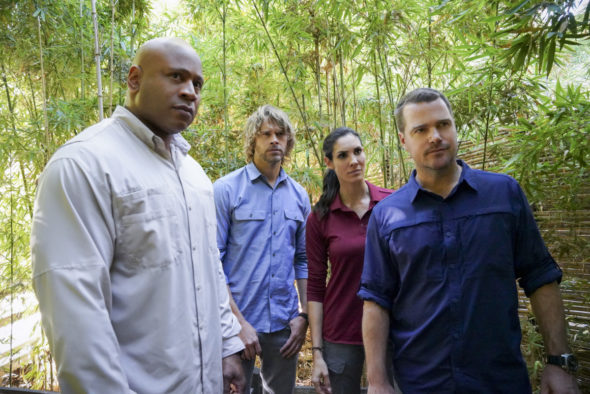 Today, CBS renewed its NCIS: Los Angeles TV show for a tenth season. The second series in the NCIS franchise has lost some viewers over the years and isn’t a standout in the demo, but the show will go on — at least for now.

NCIS: Los Angeles: A Look at the Ratings

The ninth season of NCIS: Los Angeles is averaging a 0.95 rating in the 18-49 demographic and 7.991 million viewers. Compared to season eight, that’s down by about 28% and down by 21%, respectively. Find out how NCIS: Los Angeles stacks up against the other CBS TV shows.

What do you think? Do you still like the NCIS: Los Angeles TV series? Will you watch the 10th season? Sound off, in the comments.

I LOVE ALL OF THE NCIS Series La and New Orleans and NCIS, I watch all of them even if I have to tape them I also love watching reruns

Am a loyal, and committed viewer of ncis la, will continue watching it as long as it runs, but would like to see one change. While I like Nia Long, her character Mosely has to go. I can’t stand her for many reasons, but the main reason is she has a negative effect on the team. I hope NCIS LA will air for more seasons to come.

SALLY A BEATTY
Reply to  Mario

I really like NCIS LA. I have watched it from the beginning. But I agree with Mario I do not like Nia Longs character. The character just does not fit with the great team.