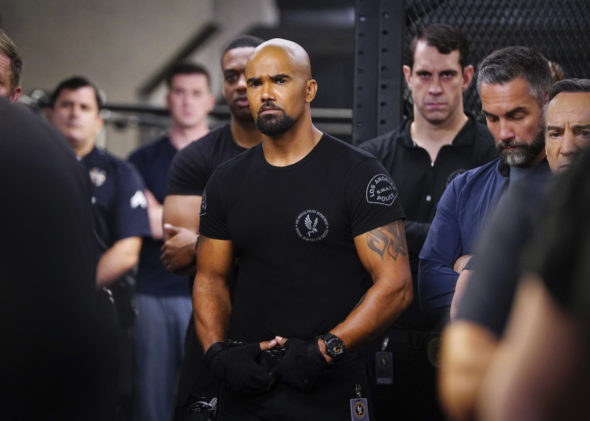 The Tiffany Network is doubling down with Hondo and Deacon. CBS has renewed its SWAT TV show reboot for a second season. The high-action program is a reboot of the 1975 original, starring Steve Forrest, Robert Urich, Rod Perry, Mark Shera, and James Coleman — itself a spin-off of The Rookies on ABC.

SWAT: A Look at the Ratings

The first season of SWAT is averaging a 1.02 rating in the 18-49 demographic and 6.33 million viewers. In terms of its demo numbers, the first season has been a top-ten performer for the network. Find out how SWAT stacks up against the other CBS TV shows.

CBS has enjoyed some success with new TV series, this year. Today, the Tiffany Network also renewed its SEAL TEAM TV show for a second season. The two series join Young Sheldon, which was previously renewed for season two. Check out the CBS press release, for more.

“These exciting new dramas have been sensational additions to our schedule, are striking all the right notes creatively, and really connect with our viewers,” said Kelly Kahl, President, CBS Entertainment. “SEAL TEAM has strengthened our Wednesday line up – routinely winning its time period with over 10 million viewers and allowing us to build an even more powerful night, while S.W.A.T. has improved Thursday’s 10:00 PM hour by over 2.5 million viewers versus last season. Additionally, both are among the very top streamers on our digital platforms, including CBS.com and CBS All Access. We congratulate the talented casts and producers on an amazing year as we look forward to their return next season.”

SEAL TEAM is a one-hour military drama starring David Boreanaz that follows the professional and personal lives of the most elite unit of Navy SEALs as they train, plan and execute the most dangerous missions that our country can ask of them. Benjamin Cavell, Ed Redlich, Christopher Chulack, Sarah Timberman and Carl Beverly serve as executive producers. SEAL TEAM is produced by CBS Television Studios.

What do you think? How do you like the first season of the SWAT TV series reboot? Did you expect CBS to cancel or renew it for season two?

Love it and hope it’s renewed!!!

Yo! They should do a season 2 of Swat, it was lit

Glad to see SWAT renewed. Shemar is great in this roll.

really happy to see S.W.A.T. renewed.. as the series progressed the acting and the characters improved and cannot wait for season 2

I love this show and can’t wait for season. One of the best new shows.

I had such high hopes 4 SWAT & the first night was ready with Popcorn & immediately saw this was NOT a part 4 Shemar. On CM he was entertaining emotionally, a bit of comedy tossed in. We dont need shows that R all sex, sexual tension, sweaty water oiled down men with muscles just pumped up 4 every1. Its BORING, especially when the script is all said in monotone Hondo. Maybe I put 2 much in a few really good scenes he had on CM, & then the cuteness with TechGirl & thought maybe, with a bit of concern,… Read more »

I love the first season of swat. Itd be too much to type about it. Although I hope hondo and his captain get back together and right now I’m a tiny bit stressing out when the next season will be out. Can’t wait

saw that coming a mile away

I love SWAT. I am so happy it was renewed for a second season. I love Shemar. The whole cast is awesome. Best show on the air!!