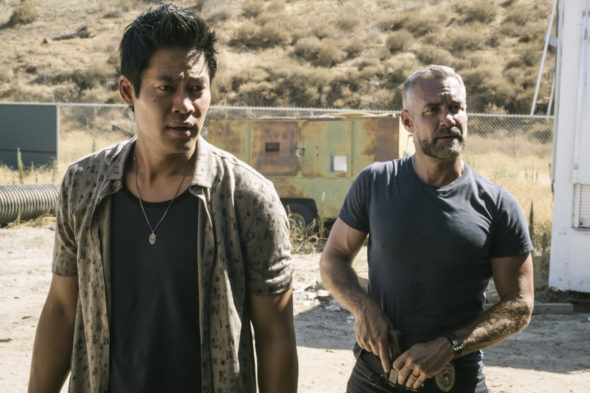 What’s ahead for Hondo and his team in the fourth season of the SWAT TV show on CBS? As we all know, the Nielsen ratings typically play a big role in determining whether a TV show like SWAT is cancelled or renewed for season five. Unfortunately, most of us do not live in Nielsen households. Because many viewers feel frustration when their viewing habits and opinions aren’t considered, we invite you to rate all of the fourth season episodes of SWAT here.  *Status Update Below.

What do you think? Which season four episodes of the SWAT TV series do you rate as wonderful, terrible, or somewhere between? Do you think that SWAT should be cancelled or renewed for a fifth season on CBS? Don’t forget to vote, and share your thoughts, below.

When they started getting into this mask and social distancing bs in season 4, I stopped watching. So tired of hearing about Covid. I watch tv shows to escape reality, not live it.

I love SWAT!! I’m so glad that it wasn’t canceled! This is one of the best, if not THE best show out now! It’s right up there with Law & Order!

I have always enjoyed SWAT. Police, law enforcement shows are my favorite. My only complaint is that every show has something to do with race and possible racist police. I am tired of shows trying to cram race down our throats. Get back to the original police type episodes. I thoroughly enjoy the cast and their relationships.

So happy SWAT was renewed for Season 5! It’s a fantastic show keep it around for a long time.

Keep this show going. This is a great show one of the better ones..