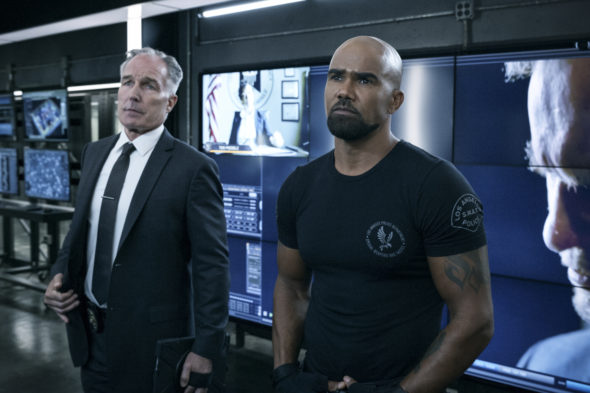 Will the ratings improve this year? Has the SWAT TV show been cancelled or renewed for a fifth season on CBS? The television vulture is watching all the latest cancellation and renewal news, so this page is the place to track the status of SWAT, season five. Bookmark it, or subscribe for the latest updates. Remember, the television vulture is watching your shows. Are you?

The fourth season of SWAT averaged a 0.42 rating in the 18-49 demographic and 3.16 million viewers. Compared to season three, that’s down by 26% in the demo and down by 22% in viewership. Find out how SWAT stacks up against other CBS TV shows.

Will CBS cancel or renew SWAT for season five? This show has been one of CBS’ lowest-rated scripted series. While I don’t think that it will necessarily be cancelled this time, it could end up on the chopping block if the network needed a slot on the schedule for another series. I’ll update this page with breaking developments. Subscribe for free alerts on SWAT cancellation or renewal news.

What do you think? Are you glad the SWAT TV show has been renewed for a fifth season? How would you feel if CBS had cancelled this TV series, instead?

Cancel and make me a happy camper. But I would miss Shemarm

No I wouldn’t be happy if SWAT were canceled. I personally love the show and the cast. Not just Shemar Moore even though he does make it more interesting to watch . Mark Harmon is a big rain on my parade from NCIS, so please don’t turn this into a hail storm. The age demographic goes well beyond 49yrs. It stretches out into the 80yr. range. Think about it.

I love the show, but because you went BLM and racial injustice on the show, which people don’t want to see, you will find people wont watch. Dont push the leftist narratives and viewership might go back up.

My family and I are so excited that S.W.A.T. will be returning!!!! This was one of the shows that helped during the Covid nightmare!

My favourite programme. I just love it.