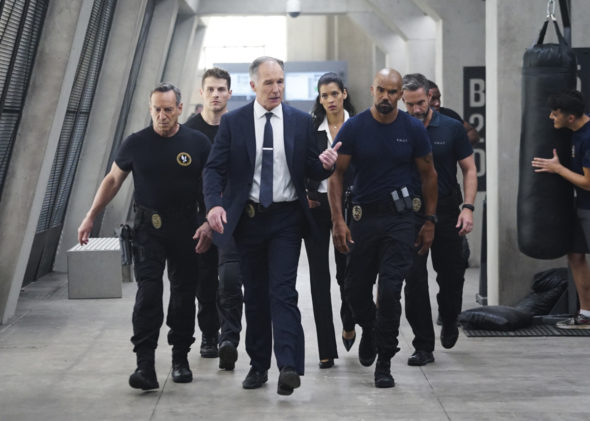 TV show description:
Based on ABC‘s 1970s TV series and the 2003 feature film of the same name, the SWAT TV show on CBS is is a police action drama centering on on Sergeant Daniel “Hondo” Harrelson (Moore). A lifetime Los Angeles local and former Marine, Hondo has been tapped to lead a new “last stop” Special Weapons and Tactics unit.

Because he is L.A. born and raised, Hondo feels deeply loyal not only to his “brothers in blue” but also to the people they serve. This makes him particularly qualified to lead the team and build a bridge between the force and the community.

David “Deacon” Kay (Harrington) is a seasoned, competent officer. Although can’t help but feel overlooked for the top job, he is extremely loyal and committed to the team’s success. On the other hand, newcomer Jim Street (Russell) tends to be overconfident. Still, he has the potential to become a key player.

Hondo’s tactical unit also includes canine trainer Christina “Chris” Alonso (Esco), a skilled officer in her own right. Then there is Dominique Luca (Johnson), whose driving expertise ensures the team is able to get into and out of risky scenarios.

L.A. Metro Captain Jessica Cortez (Sigman), whose profession is her top priority, supervises the SWAT team. She and Hondo also have a personal relationship.

Finally there’s Mumford (Onorati). Bold and self-assured, he heads up another L.A. unit and is certain of his own approach to situations. Although his group and Hondo’s are fierce rivals, they relish their competition.

With Hondo at the lead, the SWAT officers are devoted to their jobs and are willing to lay down their lives to protect and serve.

What do you think? Do you like the SWAT TV series? Should this TV show be cancelled or renewed for another season on CBS?

I love watching it and it’s exciting

Please don’t cancel Swat. It is the best show of this kind,,

I think you should renew Swat. I wait for that show to come on every Sunday night. I think all of the actors are great and Sherman Moore is my favorite guy. I have loved him in everything he has played in. Please don’t take Swat off, it’s a great show. I’ve watched it from the beginning and I get so upset when everytime I watch something an like it they take it off of TV.

This is one of my favorite shows. Please do not cancel it

Renew SWAT. This Is my favorite show. I tape it and watch it over and over and over. I love all the characters , the scenes, action and plot Please do not cancel but you must renew ,renew ,renew!!!!

Renew it forever. Love the show and the cast. Kudos also to the scriptwriter especially to Hondo character who uses wise words.

Renew it! Every single episode it fantastic!!