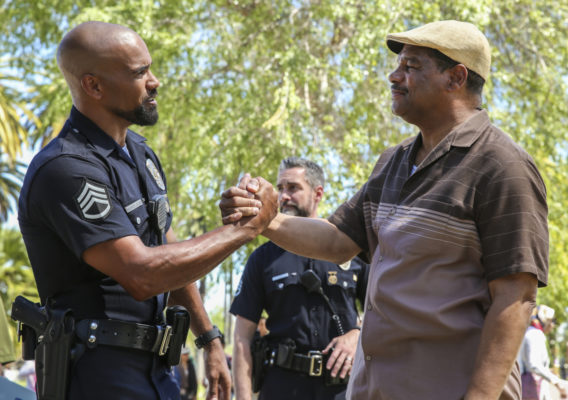 Meanwhile, 9JKL is a sitcom loosely based on a moment in star Mark Feuerstein’s life when he lived next door to both his parents and his brother. The cast also includes David Walton, Elliott Gould, Linda Lavin, Liza Lapira, Matt Murray, and Albert Tsai.

CBS has ordered three additional episodes for 9JKL and given SWAT a full season order, bringing the latter’s total to 20 episodes.

CBS GIVES FULL SEASON ORDER TO “S.W.A.T.” AND PICKS UP THREE ADDITIONAL EPISODES OF “9JKL” FOR THE 2017-2018 BROADCAST SEASON

CBS has given a full season order to new drama series S.W.A.T. and has picked up three additional episodes of new comedy 9JKL for the 2017-2018 broadcast season.

What do you think? Have you seen SWAT and/or 9JKL? Do you hope they get renewed?

love the shows s.w.a.t. young Sheldon 9jkl hope they stay on for a long time

I love S.W.A.T. I never miss an episode. The acting is awesome. I always have good feelings at the end of each show. Shemar is a great actor and believable!! The writers are exceptional. Please don’t cancel this show.

9jkl is poor show wasting the talents of some good actors, I still don’t know why they cancelled Me, Myself and I

I am sorry to be so disappointed in the show. Was really looking forward to it too. I just find the directing to be lacking , and much of the acting quite wooden. I’d prefer to see Shemar back on Criminal Minds…but, when I see the rating numbers here, don’t think it will happen. Really disappointed.

Both shows are better than I expected. I start, unfortunately, with the attitude of not getting attached because they will just get pulled. We are not allowed time to get into a show any more. Our viewing habits have changed but their calculations don’t so bye bye shows. I enjoy both shows but S.W.A.T. would be my favorite. Thank you.

That’s great news for S.W.A.T. ! Can’t wait to see the character and story development. It seems each episode gets better and better. Bravo!