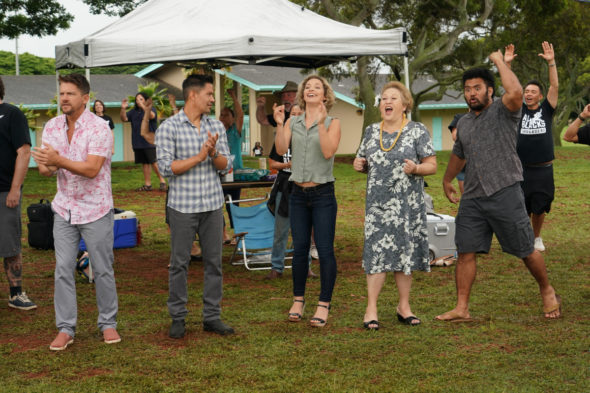 Despite some less-than-impressive ratings, CBS has given full-season orders to three more new shows — God Friended Me, The Neighborhood, and the reboot of Magnum PI. The network previously gave Tuesday’s FBI series a full season order.

CBS has yet to order any additional installments of the Murphy Brown revival or the Happy Together sitcom. While neither is doing great in the ratings, they are drawing similar numbers to Magnum PI.

CBS GIVES FULL-SEASON ORDERS TO “GOD FRIENDED ME,” “MAGNUM P.I.” AND “THE NEIGHBORHOOD” FOR THE 2018-2019 BROADCAST SEASON

CBS has given full-season orders to the new dramas GOD FRIENDED ME and MAGNUM P.I. and the freshman comedy THE NEIGHBORHOOD for the 2018-2019 broadcast season.

These series join the previously announced FBI as freshman shows receiving full-season orders for 2018-2019 on CBS.

What do you think? Are you glad that CBS has given full season orders to these three shows? Do you have a favorite?

I hope Magnum PI gets cancelled. Another ridiculous reboot. Except for Hawaii 5-0, most reboots are awful and just shows the inability to come up with something new and creative without having to do a poor imitation of a once brilliant show.

OR, you could simply…not watch? It’s a bit odd to “hope” a TV show that people enjoy gets cancelled >.>

He has a valid point, networks are investing little money into new content. So what do we get stuck with a bunch of junk and garbage; absolutely no value of creativity.New and creative content is what people want these days. Not rehashes of Murphy Brown etc. etc. etc. This is the year networks and then realize that people don’t want every piece of garbage to be remade in the past 30 years. When I heard make a Magnum PI being remade I was really skeptical. And yes it’s not as good as the original. Murphy Brown is a total disaster… Read more »

I agree with Clem and Doo. I hope the new Magnum is cancelled. It dilutes the legacy of the original show and adds nothing. Hollywood needs to focus more on original programming or at least somewhat original. The trend of remaking/rehashing old movies and tv shows has driven me back to watching the originals not current tv or current cinema. Why waste time or money on remakes when you can watch the originals.

I rarely like TV shows in the past few years. I liked Glee and now “God Friended Me” is by far my favorite show of the season. It is so moving. I hope it will do well in the ratings and lasts. The first three episodes were great!

I hope they renew Happy Together. The chemistry between Amber Stevens and Damon Jr. is amazing and the show is cute and funny.

Please add more episodes of Happy Together people watch it too funny related Damon Dwayne son also comedian I love it so good.