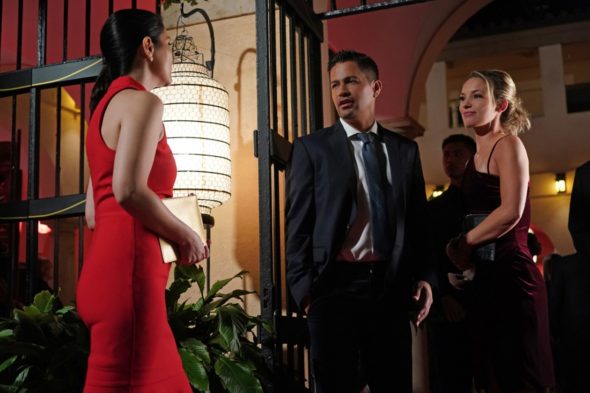 The new Thomas Magnum may not have a signature mustache but his show will have a second season. CBS has renewed their Magnum PI TV series for the 2019-20 broadcast season.

A CBS crime drama, Magnum PI stars Jay Hernandez, Perdita Weeks, Zachary Knighton, Stephen Hill, Tim Kang, and Amy Hill. The mystery thriller centers on former Navy SEAL Thomas Magnum (Hernandez), who is back from Afghanistan and working as a private investigator. Magnum lives in a guest cottage on the Robin’s Nest estate in Oahu, where he also serves as a security consultant. With his team at the ready, a vintage Ferrari at his disposal, and his trademark aviator sunglasses, Magnum is always ready to crack the next case.

The series launched in September to a 1.16 in the 18-49 demographic with 8.12 million viewers. The numbers have fallen quite a bit since then and the 13 episodes have averaged a 0.96 in the demo with 6.07 million. Compared to the 21 scripted CBS shows, Magnum PI ranks ninth in the demo and has done significantly better in the timeslot than last year’s occupants (cancelled sitcoms like Kevin Can Wait, Superior Donuts, 9JKL, and Living Biblically).

CBS also renewed two other freshman shows – FBI and The Neighborhood — for the 2019-20 season. “Each of these distinctive shows has made their mark in a variety of ways,” said Kelly Kahl, President, CBS Entertainment. “Our goals this season were to introduce new series that audiences are passionate about, add more strength to a winning schedule and create more inclusive programming.” Thom Sherman, Senior Executive Vice President of Programming added, “We’re thrilled by the creative direction and performance of these three shows as they continue to grow in popularity and resonate with the Network’s viewers.”

What do you think? Do you like the new version of Magnum PI on CBS? Are you glad that it’s been renewed for a second season? Did you expect it to be cancelled, instead?

I want to but Magnum Pi series 2 but cannot find it anywhere I have series 1 but need the next dvd any idea where I can get it anyone?

Hi please leave magnum pi on the air
They are wonderful all of them ! great actors terrific story lines and just a wonderful happy show !!!!!
I dont only speak for myself but frim all my family all ages they absolutely love this show! Look forward to Friday’s every week ! One hour of peace and happiness. Thank you