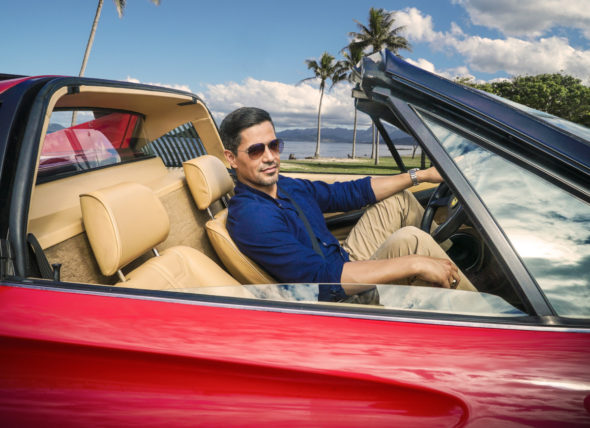 Everything old is new again — well, almost. On May 11th, CBS ordered the Magnum PI TV show reboot to series. In addition to updating the famous private investigator’s backstory — he’s now a retired Navy SEAL and veteran of the US conflict in Afghanistan — the new production has made some cosmetic changes to this Magnum adaption. Along with original star Tom Selleck, gone is Magnum’s mustache, as well as the comma between Magnum and P.I., in the show’s title. At today’s Upfront presentation to advertisers, reporters queried the network’s president of entertainment, Kelly Kahl, about those decisions. Check out the answer, below.

A CBS action-adventure crime drama, the new Magnum PI stars Jay Hernandez, Perdita Weeks, Stephen Hill, and Zachary Knighton. Weeks, as pictured below, is playing Juliet Higgins, an updated, female version of the 1980s series’ character, Jonathan Quayle Higgins III — originated by John Hillerman. As a disavowed MI:6 agent, one of Higgins’ jobs is to keep Magnum in line, with the help of her two Dobermans. That seems like a bigger story than a mustache or a comma, but we weren’t at the Upfront to ask about it. #TimesUp indeed. 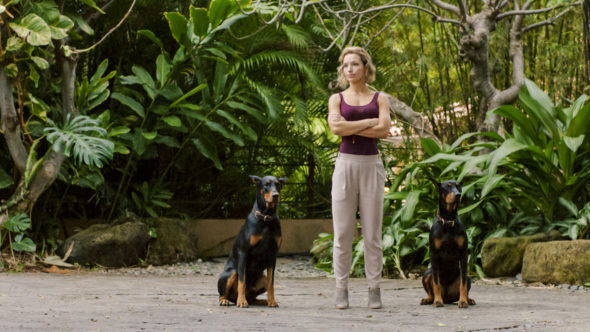 Magnum PI Minus Mustache and Comma

In place of the mustache, the new Thomas Magnum sports a goatee. You can get a better look at it, below. The Wrap reports:

“We debated the ‘Magnum’ thing for quite a bit, believe it or not,” Kahl said about the latter. “There was a comma before, we’re taking the comma out this time to streamline things.”

“I think there’s a little science behind it, actually,” he continued. “In the new world of searching, commas are not your friends.”

Perhaps that explains rival ABC’s issue with the one-and-done “Alex, Inc.” (It definitely does not.)

After the eggs benedict, the “Magnum” facial hair switcheroo served a little bit more as comic relief than sincere Q&A.

When asked by a reporter about how “rigorous” the debate was about if new star Jay Hernandez ought to copy former lead Tom Selleck’s trademark look, Kahl came up with the following:

“It’s a goatee, so it’s… half-mustache,” he said. “Thom [Sherman, a senior vice president] and I dictated that he have a goatee.” 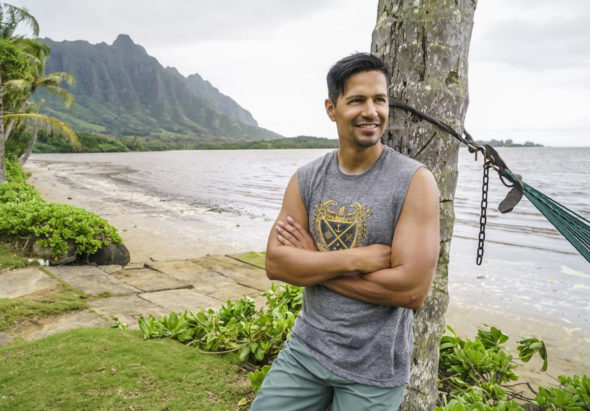 CBS released its Fall 2018 schedule, today. As of now, Magnum PI is slated to air on Mondays at 9:00pm, after new sitcoms The Neighborhood and Happy Together. Following Magnum, is the third season of Bull. Schedules often change as the season draws near, so check back at the end of summer, to be sure.

What do you think? Are you looking forward to the Magnum PI TV series reboot? Do you plan to check it out, when it premieres on CBS? Let us know.

I just can’t believe you took another great show off the air. Just when Magnum and Juliet realized they had a thing going on for each other, you took it off the air. love the writers and their story lines, it was a great show I always looked forward to watching Magnum PI, Please reconsider and bring it back.

After the all he-man Selleck, this is quite a change. At least they didn’t put it on the same night as Blue Bloods!

This is like “New Coke”. What is up with all the “soft men”, boyish men, taking over the roles of “real men”? This is new feminist age Magnum – a “Femi-Magnum” or maybe a semi-Magnum.

Hollywood should come up with new ideas rather than destroying old classics.

This can’t work as a do-over of Tom Selleck I agree with the other comment about Higgans being a large part of the plot.

Like Minnie R mentions, MacGyver and Lethal Weapon, as well as Hawaii Five-O, have been decent reboots from the last century. I believe that is mainly because the main characters personalities and quirks, at least in the MacGyver and Lethal Weapon reboots, were not substantially changed from the original characters they were based on. Higgins became an iconic character and was as much a star of the show as Magnum. The cat and mouse interaction between Higgins and Magnum was an integral and anticipated part of most shows that I think only held up because of ther personalities of the… Read more »

I will give it a chance. Other reboots like “MacGyver” and “Lethal Weapon” have become my favorites. This one might do the same.

This reboot needs to be deleted from all existence.

if they were going to be ‘modern’ enough for a female Higgins, they could also be more modern & kind, by having Dobermans whose ears had not been cropped, and whose tails had not been docked…are they now named after goddesses, instead of gods?

The more I hear about this reboot, the more that I think that it has flop written all over it.

Far too much meddling for my mind to have a hope of success.